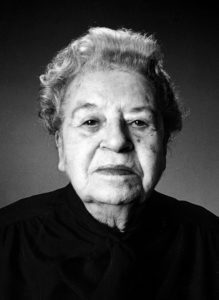 Elinor ‘B’ Bridges has become a legend in her own time among the more recent generations of women activists in Memphis.

Her work in women’s causes and in discovering women’s history reaches into the 1920s and 1930s during the struggle for the vote and equal rights. Her great-grandmother, grandmother and mother were all ardent feminists in Mississippi, so B’s activism has always been key to her life. Her great-grandmother was the first woman to vote in Mississippi. That activism, B said, still is not extremely popular in her age group. “I’ve had ’em shake their fists at me and say, ‘You just want to be like the men.’ And of course that’s not true. … “If you dared to try to do anything, you were a ‘pushy woman.’ I just try to ignore it and go on – that’s all you can do.”

Early on, she broke an employment barrier when she was hired by the federal government as an accountant because her name – B Bridges – hid her gender.

Her paid career was an accountant but her passion was writing and communicating, especially about women’s history and concerns. She also worked for women’s rights as a member of the American Pen Women and the Business and Professional Women. She argued the need for change to make society an equal place in articles published in The Commercial Appeal.

She is revered by other leaders like Carol Lynn Yellin, Mary Robinson and Frances Loring as a founder of the Memphis women’s movement. In 1960, Memphis State University gave her its “Woman of the Year” award and she was listed in the 1970-71 Who’s Who Among American Women. She was a founder, first treasurer and newsletter editor for the Women’s Resource Center. She secured a grant through Levi Strauss that funded furnishings for the center. She spent hours working to keep it going when funds for staff ran out.

At age 68, she headed the center’s women’s history committee that worked with Dr. Willie Herenton, Barbara Sonnenburg and others to integrate women’s history with the history and science curriculum in the public schools. She wrote for national publications including the BPW national magazine about the school history program. She was not satisfied when the idea of a “women’s history week” in the schools was suggested. She pressed for full integration of course content. The whole idea, she said, is that “women’s history, whatever their race, is American history.”

B was born in 1909 in Mississippi. She knew her three generations of feminist foremothers. She will be 87 in April 1996, and is still writing to The Commercial Appeal. Always the activist, B organized a consciousness-raising group after moving into a senior high rise on Highland.

Only failing eyesight forced her to cease her accountancy career after 51 years. But her vision for women – her push for equal rights and opportunity for women – has never failed.