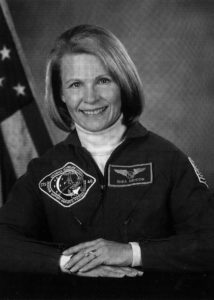 From Memphis to the dark reaches of space, Dr. Rhea Seddon has demonstrated her heroic spirit and has shown little girls everywhere that they, too, can reach their dreams.

Rhea Seddon, a native of Murfreesboro and 1973 graduate of the University of Tennessee School of Medicine in Memphis, became one of the nation’s first female astronauts when she was selected for training in 1978.

In the next 19 years, she logged more than 722 hours in space on three Space Shuttle flights. She flew as a mission specialist on the Shuttle in 1985 and 1991 and as payload commander in 1993.

Rhea grew up in the 1950s, graduating from Murfreesboro’s Central High School in 1965. Space exploration was a new American dream. Rhea was fascinated with how people would react and feel in space. But as a practical teen, she didn’t think there was any way she could ever find out. “They didn’t want women astronauts then,’’ Rhea said. “And early on, the only way you could get into space was to be a test pilot. Medicine became my real love … They were letting a few women into medical school, fewer still into surgery. I always felt very lucky to get into those fields.’’

She earned a bachelor’s degree in physiology from the University of California, Berkeley, in 1970 and her medical degree in Memphis in 1973. She completed a surgical internship and three years of a general surgery residency in Memphis with a particular interest in nutrition in surgery patients. Between the internship and residency, she served several Mississippi and Tennessee hospitals as an emergency department physician.

Just as she finished her medical training, NASA decided to admit women and scientists into the shuttle program and Rhea, 29, unmarried and without a steady job, was in a perfect position to apply. “Sometimes the stars align just right so that preparation and opportunity come together at just the right moment,’’ she says.

Her third flight, aboard Columbia, flew Oct. 18 to Nov. 1, 1993 as a life science research mission with Rhea as payload commander. It received NASA management recognition as the most successful and efficient Spacelab flown to date. The seven-person crew performed medical experiments on themselves and 48 rats. Rhea assisted in the first animal dissections in space, hailed by NASA as a scientific triumph.

After three Shuttle flights and various assignments at NASA, she was detailed to Vanderbilt University by NASA in 1996 to assist in preparation of cardiovascular experiments which flew aboard the Columbia in April 1998. She retired from NASA in November 1997, returned to her hometown of Murfreesboro and is assistant chief medical officer for the 800-physician Vanderbilt Medical Group in Nashville. She and her husband, former astronaut Robert L. Gibson, have three children.

Dr. Sedden was inducted into the Tennessee Aviation Hall of Fame in 2005, the Astronaut Hall of Fame in 2015, and the Tennessee Women’s Hall of Fame in 2015. In 2016 she was awarded the National Football Foundation Nashville Chapter’s Fred Russell Distinguished American award, the Independent Book Publishers Association Ben Franklin Gold Award for Best Autobiography/Memoir (Go For Orbit,) and a University of Tennessee Centennial Top 100 Alumni Award. She was co-recipient of the Great American Leadership Award which was presented to her along with her husband, Capt. Robert “Hoot” Gibson at Awakening 2017.