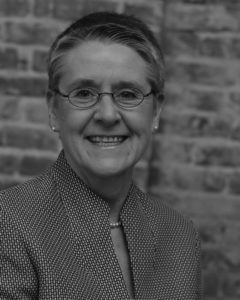 Elaine Blanchard is a writer, mother, minister, nurse, hospice counselor and actor. But most of all she is a storyteller. Elaine believes in the power of story to help us share our humanity and understand the deeper meaning of our lives.

She knows through her own experience that understanding our own story and sharing that story with others connects us to ourselves and our humanity. That knowledge has led her to a vision of using storytelling to bring self-understanding and hope to women in prison.

Elaine grew up in a rigidly religious and misogynistic Southern household. She married, became a minister, and gave birth to a daughter. She left that marriage after realizing that she is a lesbian. She became a nurse, and then a hospice nurse. She returned to the ministry, she found love and formed a life-partnership with Anna Neal. In 2000, she graduated from Memphis Theological Seminary.

While presenting the Children’s Sermon, at First Congregational Church, she began telling stories of her childhood. And people listened.

During this time her understanding of the power of story grew and she took it to other areas of her life. Having a mother with Alzheimer’s, dying in a care facility, Elaine recognized that giving voice to her mother’s story could help caregivers see her mother as a person, She created a brief story narrative of her mother’s life to “introduce” her mother to caregivers. This was hung over her mother’s bed, along with pictures from her mother’s life and caregivers began to interact with her mother in a more humanized way. This led to the work of “I Am” Stories, which helps provide narratives for families to honor loved ones at the end of life.

In 2010, she gathered childhood experiences with racism, sexism, abuse and dogmatic religion and turned them into a play. The critically acclaimed For Goodness Sake has toured extensively. Her second play, Skin and Bones, is an exploration of the shame, power and beauty of the human body.

Since 2010, Elaine has been working behind bars with women inmates to produce Prison Stories, a story listening/story telling process that gives voice to the stories of the lives of the women.

Why? Elaine grew up in a home with three brothers and a father. For Elaine, it was a “rigid, judgmental and misogynist environment….I grew up feeling like I was invisible.”

This led Elaine to a vision of using story as a way to help women adapt to life behind bars and learn to avoid the behaviors that put them there. “My inspiration to go to the prison and listen to women’s stories comes from the pain of being dismissed, neglected and forgotten.”

Each series of Prison Stories includes 12 volunteer inmates who sit in a circle two days a week for 16 weeks and talk about themselves and issues. Each group reads two books: coming-of-age story Their Eyes Were Watching God by Zora Neale Hurston and Zen writer’s guide, Writing Down the Bones by Natalie Goldberg. As they discuss the books, the women open up about themselves. At night they keep a diary. Themes tend to repeat with each group – body image, food, mothers, unintended pregnancies, life in prison and violence. At the end of the series, a readers’ theatre piece is created and performed by actors. There is a prison performance as well as performances on the outside.

The prison system hopes to reduce repeat offenses. Women who have shared their stories say the experience helps them understand their pasts and to feel like their lives matter.

Next, Elaine will work with clients of Friends for Life, to help people living with HIV tell their stories.