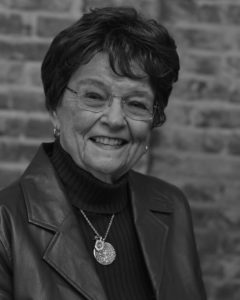 In a lifetime of service to the Memphis community – paid and voluntary – Martha Ellen Maxwell was a key engine in many landmark projects, particularly in the performing and visual arts.

Born Dec. 9, 1928, in Dyer, Tennessee, Martha Ellen Davidson was named for her two grandmothers. Her father died when she was 14 and she stepped in to help with two younger sisters when her mother went to work to support the family. Those early responsibilities at home and the discipline of piano studies helped prepare Martha Ellen for decades of leadership and achievement.

This high school valedictorian came down to Southwestern at Memphis (now Rhodes College) to continue piano studies – and began to get better acquainted with her next door neighbor from back home – dental student John Rex Maxwell. The two married in 1948; Martha Ellen continued her studies, was president of Chi Omega sorority and graduated Phi Beta Kappa.

She served for three years as assistant dean of women, then became what she herself termed “an East Memphis housewife” birthing four sons and joining the volunteer circuit. She served the Memphis Symphony League as member and later president. As chair of the once-staid symphony ball, she demonstrated a streak of initiative by changing it from a regular ball to a “BACH-A-NAL,” an auction that cleared an unprecedented $107,000 in one year. She became the first woman president of the symphony’s governing board, the Orchestral Society. Projects she initiated include the Decorator Showcase and the Symphony Pops. Martha Ellen was instrumental in getting Alan Balter as symphony conductor.

During her Orchestral Society presidency, she had also been a Memphis in May volunteer and in 1977 founded a river-bluff symphony concert now known as the Sunset Symphony. Martha Ellen was part of groups that formed to save the Orpheum Theater from demolition and to rescue the Levitt Shell.

In 1979, Martha Ellen gave up her role as a volunteer for the arts to become executive director of Memphis in May. She recalled that the organization had “two desks….. I was handed a folder with $46,000 in bills and told we had no money in the bank.” So she initiated the idea of commissioning Memphis artists to create MIM posters, the sale of which would benefit the festival. Four years later, MIM was in the black and had a budget of $1 million. She left over differences with some board members. She said, “. . I was an assertive woman who wanted her own way, and there were some young male board members who didn’t know how to take that.”

Invited to speak to the then-all-male Rotary Club, she listed three things wrong with Memphis: racism, male chauvinism and turf protection. She has said that she never felt discriminated against.

This from the “token” white woman on the MIM board, the first female president of the Memphis Orchestral Society and the third female member of the Downtown Rotary Club!

After MIM, she took on the challenge of raising funds to expand the Dixon Gallery and Gardens. She  surpassed the Dixon goal of $1.8 million by $200,000! From 1985-1987 she was the first executive director of the Memphis and Shelby County Film, Tape and Music Commission. She went on to become executive director of the symphony for 10 years – leading from 1993-2003 through the search for a conductor, construction of the new concert hall downtown and challenging funding times. Along with that job, in the 1990s she served for over eight years as volunteer president of the Tennessee Summer Symphony, organized to employ the state’s professional musicians to take classical and semi-classical music to smaller, rural communities.

As one nominator said, “In a time when women leaders were rare and a woman’s path to community leadership was marked by discouragement, criticism and injustice, Martha Ellen Maxwell succeeded.”

After her death on March 6, 2014 at age 85, The Commercial Appeal saluted her in an editorial, saying in part: “Because of Mrs. Maxwell’s tireless advocacy, and her fundraising and managerial skills, Memphis is indeed a better place for the visual and performing arts communities.”