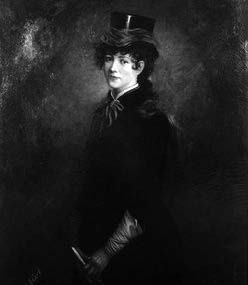 The story of Bessie Vance Brooks is found primarily in images and architecture, rather than written records. This is somehow fitting for an artist who played a critical role in the development of the cultural and educational institution now known as the Memphis Brooks Museum of Art.

Bessie Vance was born near the end of the Civil War to Margaret Dabney Vance and Calvin Fletcher Vance, a prominent Memphis attorney.

She was educated at the Clara Conway Institute in Memphis and studied art under her lifelong friend Katharine Augusta “Kate” Carl. Described in her obituary as “a distinguished artist in her own right”, Bessie traveled extensively and studied in Paris. And, in a portrait painted by Kate Carl, we can imagine that Bessie enjoyed riding horses because she is outfitted in an elegant black riding habit with hat, red scarf, leather gloves and riding crop.

Years later, shortly after the turn of the century, Bessie married businessman Samuel Hamilton Brooks, whose first wife had died several years earlier. An Ohio native who moved to Memphis in 1858, Hamilton Brooks made his fortune in the wholesale grocery business and later served on the board of a bank and an insurance company. His family recalled that he had expressed an interest in building a public art gallery even before he met Bessie. Perhaps it was this shared love of art that brought the couple together during the last decade of Hamilton’s life.

In 1906, the wife of Hamilton’s business partner, E.A. Neely, spearheaded a campaign to raise support for an art museum. Mrs. Neely’s plan involved raising money through schoolchildren gathering discarded waste paper, rags and waste rubber, such as garden hoses and galoshes. This effort had languished by the time Hamilton died in 1912. The following year, Bessie made the dream of an art gallery a reality when she donated $100,000 in her husband’s memory. The Georgian marble building was designed by New York architect James Gamble Rogers who had recently completed the
Shelby County Courthouse. Ground was broken in Overton Park in 1914 – one hundred years ago this year. The museum opened on May 26, 1916.

At the dedication, Bessie’s speech was read by the Episcopal Bishop Thomas F. Gailor: “I hereby give and donate this building to the public use as a repository, conservatory, and museum of art—to be kept and maintained forever. . . for the free use and service of students of art and for the enjoyment, inspiration, and instruction of our people.”

Bessie’s generosity provided more than a building; it created a place where many other women in the city contributed to the arts and, especially, to art education. The Memphis Art Association, founded in 1914 by Florence McIntyre and other members of the Nineteenth Century Club, adopted the Brooks Museum. McIntyre, an artist who studied under William Merritt Chase, became the museum’s first director. (She received the Heritage Award from Women of Achievement in 2008.)

Other women’s organizations supported the museum by raising funds and organizing lectures and children’s programs. In 1934, the organization now known as the Brooks Museum League was formed to promote the work of the museum with “special attention focused on activities for children.” The League continues to support art education by hosting the annual Mid-South Scholastic Art Awards to honor exemplary art created by junior high and high school students in the region.

Bessie Vance Brooks did not remain in Memphis to see the development of the Brooks. A few years after the museum opened, she moved to Florida where she died in 1943. She was buried in Elmwood Cemetery with her husband and other members of his family. If you visit Elmwood today, you won’t find much information about Bessie’s history. Her name was never added to the family tombstone in the space below her husband’s.

In order to learn about her legacy, you must leave Elmwood for the Brooks Museum where you can see the fulfillment of Bessie’s vision of both a cultural and educational institution for our city. In keeping with her wishes, the museum continues to offer education programs, hosting more than 15,000 students a year and providing workshops and resources for teachers.

With a collection that numbers almost 9,000 works of art, and a building that has been expanded three times, the Brooks has no doubt exceeded what Bessie imagined for her community. Her legacy endures and generations have benefited from the beauty and glory of the Memphis Brooks Museum of Art.