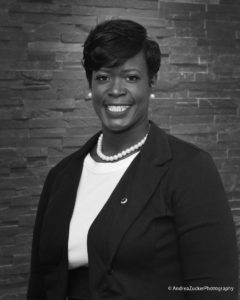 COURAGE
For a woman who, facing active opposition, backed an unpopular cause in which she greatly believed:

Kamillia Barton survived a traumatic childhood, found the courage to escape an abusive marriage, and has gone forward to become a fighter in the battle to help others struggling to remove themselves from domestic violence.

When she was nine years old, Kamillia realized that her parents were addicted to drugs. Off and on throughout her childhood she and her siblings lived with various family members. At times the family was homeless. Kamillia would stand outside corner stores asking for money to buy food her siblings and herself. Many nights they went hungry. After she and her sister were held hostage at gunpoint by drug dealers, they entered the foster care system. Kamillia stayed until age 15. She left foster care to live with an aunt. It was another negative environment. She dropped out of school in the ninth grade and by age 17 had moved into a place of her own. She supported herself with jobs in the fast food industry and started seeing a man ten years older.

They married and together had two children, now both teenagers. Her husband became verbally, psychologically and physically abusive. Over the years the abuse continued. She would call the police but he was always gone when they arrived. She was told that because there was no crime, they could do nothing. She never followed up and he was never charged.

But in 2010, her life threatened, she took the children and they left, with nothing but the clothes on their backs. At the time, she worked for a furniture company and her employer gave her free furniture. As it turned out, the gift was not free and soon she was again in an abusive situation and once more found herself and her daughters being threatened. She stayed because she saw it as the way to support her daughters.

But In December, 2012, she fled Memphis and found safe haven with her uncle in Sledge, Mississippi. She wanted to work on her GED and in discussing her plans with supportive family and friends, she decided to return to Memphis and its resources. She made her way to the Family Safety Center and credits Melissa Farrar and Felica Richard for helping her find the strength to work with the Center to keep her family safe and gave her hope.

Since that time Kamillia Barton has transformed her life. She has completed her GED, graduated from Southwest Community College, and is now studying social work at the University of Memphis. She has worked as a victim’s advocate for the Family Safety Center and the YWCA Immigrant Woman Services Blue Print for Safety program.

In November, 2016, Kamillia founded and became first executive director of STEPS, Successful Transitions Empowering Permanent Safety, a nonprofit dedicated to assisting victims of sexual assault and domestic abuse. Through STEPS, she works to help families dealing with domestic violence through situations she has faced and overcome. To achieve maximum effectiveness, STEPS maintains strong external relations with partner organizations, volunteers and other supporters in the community. Her goal is that people seeking to survive and escape abusive relationships do not slip through the cracks. She connects individuals with local resources. For meetings with social services agencies, legal services, medical appointments, the search for housing, or help with finances, she goes with them as is their personal advocate, available 24/7. If for some reason she can’t go, she makes sure they have Uber or Lyft.

Kamillia’s dream is for STEPS to serve the many. She would like to have a facility to house those in need, a safe place to live in a more permanent environment than shelters can provide until lives are stabilized and on track. She understands the importance of being able to deliver promised services so for now information about the program is spread by word of mouth. Though basically a one woman operation, STEPS has already served over 30 clients. As resources grow, services will expand.

As a courageous survivor, she is passionate. Kamillia says, “I believe my entire life has prepared me for advocacy and working with individuals who have faced trauma and adversity…Fortunately, I beat the odds. I am not what studies and statistics said I could be. Therefore, I am confident your past does not determine your future; your life’s challenges and traumatic experiences are not in control of your destiny…My greatest passion now is in advocacy. I love to motivate and inspire victims to become survivors and to have hope. It is my calling, and now my life mission.”

Kamillia Barton stands up and speaks out at every opportunity. And Women of Achievement thank her for having the courage to do so.