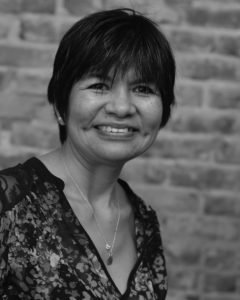 Domestic worker, wife and mother, Cristina Condori is an immigrant from Argentina who places her beliefs on the line.

Since moving to Memphis almost a decade ago, she and her family have faced numerous obstacles. Economically, times are hard and they struggle monthly to make ends meet. Her husband lost his job in Memphis and currently works out of town. Her former clients can now only afford help once or twice a month so she constantly hands out cards and flyers seeking opportunities for housekeeping and childcare work. She barely earns $240 per week to help support a household that includes two daughters, a brother and a guest.

Her two daughters are both excellent students involved in many different volunteer activities. And Cristina has also been working to improve her English and takes every opportunity to practice.

Yet, Cristina somehow finds many hours every week to do what she can to bring greater justice to others who have been in situations similar to her own.

She volunteers with Workers Interfaith Network, and Tennessee Immigrant and Refugee Rights Coalition, as well as many other groups dealing with justice issues, women’s issues, and health causes.

Cristina’s convictions are strong, so strong that she was willing to take the fight for freedom and the rights of citizenship in the United States to Washington, D. C. There, on September 12, 2013, she joined women from 20 states to blockade the intersection outside of the House of Representatives to protest the House’s inaction on comprehensive immigration reform to treat women and children fairly.

Cristina and the other women were prepared to be arrested and arrested they were. This historic act of civil disobedience included the largest number of undocumented immigrant women to ever willingly submit to arrest. The 105 women who were arrested wanted to draw attention to the fact that women and children constitute three-quarters of immigrants of the United States and disproportionately bear the burden of the failed immigration system.

On her blog the next day, Cristina said “The decision and oath that we took together was a great action… Women of all ages, professions and immigration status sat in the street under a hot morning sun of Washington, D.C., in front of the Capitol and Senate as part of a civil disobedience for a Comprehensive Immigration Reform that is fair and humane. We were there for the people we love and for all those who suffer from this immigration system that is broken and that continues to divide families. It was about OUR freedom! But also it was about the freedom of all immigrants, of all children who were separated from their parents, of all workers who were and will continue to be deported each and every day….”

One of her nominators, Rev. Rebekah Jordan Gienapp, herself a Woman of Achievement for Determination honoree for seeking fairness for workers, says Cristina Condori is ”one of the most determined, energetic, and brave women that I have ever known…She is truly a leader, inspiring other immigrants to take risks and speak out for greater justice.”

Participating in civil disobedience for a just cause takes courage. It is an intimidating prospect for anyone, but for an immigrant so much more is at risk than for a citizen.

Cristina Condori truly deserves to be honored for her commitment to work on behalf of immigration reform and her courage to stand up for her beliefs.