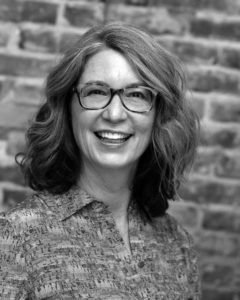 Margot McNeeley was born in Brookline, Massachusetts, but moved a lot. She lived in Ohio, Pennsylvania, Georgia, Florida, Texas and Arizona.

Twenty-two years ago she was working in a bookstore called Bookstar in Phoenix, Arizona, when one of the owners called asking if she’d ever been to Memphis. A month later she moved to Memphis to open Bookstar at Poplar Plaza. She worked and attended the then-Memphis State University.

She and her husband dined out a lot and Margot began to notice all the waste that restaurants create. Each meal served was reported to generate a pound and a half to two pounds of trash. She didn’t want to be part of that and grew tired of just complaining about it.

In late 2007, she met Chef Ben Smith and his wife Colleen Couch-Smith from Tsunami to talk about what might be done to reduce restaurant waste since the city doesn’t recycle for businesses. Margot found out that Ben and Colleen were already taking steps to reduce their environmental impact so working with them was the perfect starting point.

The three met for about seven months, figuring out what steps could be taken that would have the greatest impact but that would not break the bank or create too much more work for businesses. Margot searched for an organization to model or join, looking for something local, affordable to restaurants and unique to the Mid-South.

Finding nothing in Memphis that fit this description, Margot made the idea a reality by establishing Project Green Fork. The mission: to contribute to a sustainable Mid-South by helping reduce environmental impacts, with a focus on strengthening homegrown restaurants.
“Tsunami was a great pilot restaurant for Project Green Fork and from there it just kind of caught on,” Margot said. She had always been interested in environmental causes and even as a child preferred being outdoors, but had not been involved in green efforts until founding Project Green Fork.

Since Project Green Fork receives so many calls from other communities trying to set up their own version of it, Margot enlisted the help of a local writer and created the “Toolkit for Restaurant Sustainability” that other like-minded people can purchase.
The organization certifies restaurants as practicing sustainability based on six steps:
• Engage in kitchen composting.
• Recycle glass, metal and cardboard.
• Use sustainable products.
• Replace toxic cleaners with non-toxic cleaners.
• Complete an energy audit and take necessary steps to reduce energy and water consumption.
• Prevent pollution.

Margot connected with another woman who wanted to help – Madeleine Edwards. Together the two set up Madeleine’s business, Get Green Recycle Works, which picks up and recycles glass and cardboard from the eateries and also will haul bins of composted food debris to community gardens.

And the numbers continue to grow.

Memphis is fortunate that Margot McNeeley chose to live here and to share her business savvy and her determination with local restaurant leaders so that we can watch for that distinctive sticker with the leafy green fork that lets us know that we are dining in a business that cares about our environment.