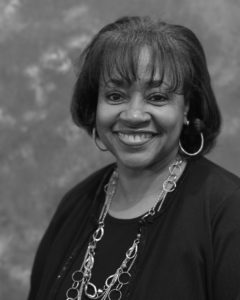 Bettye Boone is a woman’s woman.

She believes in the power – and responsibility – of women to make a difference in politics.

She believes in education and its power to equip women and girls for full participation in our nation.

She believes that women and girls can learn crucial lessons of financial literacy and can be empowered to make good decisions and plans for themselves and their families.

Bettye Boone believes in women and tonight we honor her vision of unity, activism and change.

Bettye was born in a small town near Atlanta, Georgia, and earned a B.A. in sociology and psychology at Morris Brown College. She worked for the U.S. Department of Health and Human Resources and then in 1986 began a 20-year career with the Internal Revenue Service.

Her IRS duties moved her to Memphis in 1995 and she quickly found her way to Mississippi Boulevard Christian Church where she became a leader and met other leading women.

In October 2004, she joined the Memphis chapter of the National Coalition of 100 Black Women whose mission is to advocate on behalf of African-American women in leadership development and for equity in health, education and economic development. Bettye says, “I was looking for an organization that I could do some community service work to help others succeed. The rest is history.”

Bettye retired from the IRS in 2006. She became part-time stewardship director for her church but shifted tremendous energy to the Coalition and projects to empower women. In 2008, she was elected president of the Memphis chapter and held that role through 2012. Among initiatives she led are:
• Young Women of Excellence conferences that brought an average of 200 girls and their parents to workshops on self-esteem building, career planning, decision-making, leadership, finance and communication skills.
• HIV/AIDS awareness and testing events that drew more than 1,000 persons, mostly women, for testing and education
• The 2012 Sisters’ Keeper Financial Literacy Program – a six-week session that equipped 12 women to better manage their households
• Women Vote Early campaign of signs, rallies and publicity to spur women to vote in the most recent national election. Bettye personally solicited organizations across racial, cultural and partisan lines to collaborate in the campaign – from various sorority chapters, the Memphis Area Women’s Council, the Shelby County Democratic Women and others.
• Pancakes and Politics political forum in fall 2014 for candidates in the crowded local election.

The chapter earned the 2009 Chapter of the Year award for its educational programming. Bettye was honored in 2011 with the Tri-State Defender’s 50 Women of Excellence award and in 2013 by Mayor AC Wharton and Mrs. Ruby Wharton with the woman’s rights award.

Bettye is using her voice – speaking out in pursuit of her vision of equity and security for women.

Last fall, she joined her voice with Healthy and Free Tennessee and produced a YouTube video encouraging women to Vote No on Amendment One. And very recently, she stepped up to join our community’s effort to unite women leaders in support of a violence prevention campaign – Memphis Says NO MORE – combatting rape and domestic violence. She spoke openly about her own experience with violence, urging action and energy to change attitudes and to stop rape and battering.

Bettye was elected this year to another term as president of the National Coalition of 100 Black Women, Inc., Memphis Chapter.

She believes in helping people succeed. She has launched Boone Consulting and Support Services to deliver financial literacy and coaching to individuals and groups, grant writing, leadership development and presentation skills.

Living a life grounded in her Christian faith and secured by a family she loves dearly and who love her – Bettye Boone strives to unite and empower women toward a shared vision of strength, success and justice.