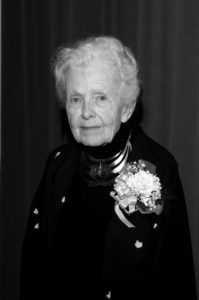 Throughout her 90 plus years, Mahaffey White has used her initiative to move through a variety of artistic careers. Dress designer, art teacher, jewelry maker, photographer – who knows what’s next? Her journey has taken her from Memphis to Chicago to New York City and back again.

Born in 1911 in Corinth, Mississippi, Mahaffey soon moved to Memphis with her family. She always knew that she wanted to be involved in art. Her mother made the family’s clothes. Following in her mother’s footsteps, Mahaffey was designing and making her own clothes before she was out of elementary school. “I intended to become a dress designer,” she says. Later she did just that.

After high school graduation, she was accepted by the prestigious Art Institute of Chicago and spent 1929 taking classes. The Great Depression ended her studies and she returned to Memphis where she remained four years.

But Mahaffey never intended to stay. On her 24th birthday, with $100 from her mother, she arrived in New York City to pursue her dreams. Living at the YWCA, she held a variety of temporary jobs. She finally ended up at Henri Bendel’s where she worked sewing clothes for Paris models. After several seasons she moved to Butterwick Patterns, where she became an assistant designer. After learning all she could, she went out on her own. Working from home she created one-of-a-kind garments for women. Her dream of being a dress designer had come true.

Meanwhile on the home front, Mahaffey meet another Memphis transplant, Richard White. They married in 1938 and went on to have two sons.

After 16 years in New York, Richard was offered a job in Memphis and the family returned home.

In her 50s, Mahaffey re-entered school. She completed her degree from Memphis College of Art in 1968, with a major in jewelry making and sculpture.

Mahaffey wanted to teach but needed a master’s degree. At the time, there was no local advanced art degree so she obtained a Master’s in Continuing Education from Memphis State. She was hired by Shelby State where she helped develop an arts curriculum. She retired in 1981 at the mandatory age of 70.

From the time she received her first degree from Memphis College of Art, through the first decade of “retirement,” Mahaffey made jewelry and sculptures. She had several shows, including one at the Memphis Craft Artist Association and at the Brooks Museum of Art.

In 1991, at the age of 80, she took a photography course. Taught by her friend Patricia Leachman, the class inspired Mahaffey to focus her artistic efforts on learning photography.

“Don’t ask me to take your picture,” she says. “I’m not a real photographer.” Be that as it may, her prints have been exhibited at Christian Brothers University, the Cooper-Young gallery, and the Abington Square show in New York. She is represented by the Durden gallery in Memphis and the Southside Gallery in Oxford, Mississippi.

Future plans include more work in color photography and perhaps a return to jewelry making.