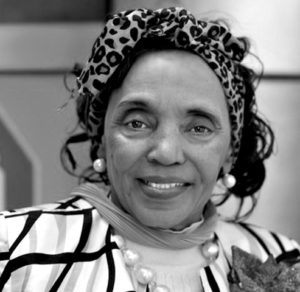 Yvonne Acey’s path to a career in education, community service and social justice began in the cotton fields of Mississippi with nine siblings. It was from those fields that her parents were determined to help their children rise.

Some of the children commuted from their Walls, Mississippi, home to Memphis schools. In third grade, Yvonne left home to live with an aunt and uncle here in the city in order to go to school at Florida Elementary and then Booker T. Washington. “You get homesick and lonesome,” Yvonne said, “but you learn to survive. We wanted opportunity.”

The schools were still segregated at that time, but still the opportunities were greater in Memphis than in Mississippi.

She had Girls Scouts, church choir and youth groups – and she took advantage of it all to grow and learn leadership locally and beyond. At Booker T. she served the student council, career club, senior yearbook staff and won an academic scholarship to LeMoyne Owen College.

Her community leadership continued at LeMoyne – clubs, NAACP, student council, Alpha Kappa Alpha sorority, and camp counselor working at St. Jude. She majored in humanities and English. She started teaching and entered graduate school at Memphis State thanks to a stipend in special education and rehabilitation. She went on to earn more than 90 credits toward a PhD.

Limited finances inhibited her idea of going to law school and the stipends that came her way were for education. Many teachers had made a difference in her life – and she was honored to march with one she calls the greatest teacher – Dr. Martin Luther King Jr.

She marched during the Sanitation Strike and was part of Women on the Move. Yvonne said, “Instead of being just a participant of change, we became dreamers and actors of change. . . to make a difference in humanity.” She attended King’s funeral in Atlanta and continued to be involved with voter registration right on through Bill Clinton’s campaign and his inauguration.
She has taught for Memphis City Schools for more than 35 years, shifting last fall to special projects for MCS. She has long been a leader within the Memphis Education Association, serving in many positions including president from 1986 to 1988.

Back in the late 1980s, as the Memphis in May International Festival was beginning, Yvonne and her husband David saw a vacuum related to culture and history of African-Americans. They began to work with a committee to involve the African American community in celebrating the experience and culture, developing esteem and recognizing ethnicity and contributions to Memphis, America and the world. From there came African in April Cultural Awareness Festival which last April saluted Senegal during its 25th outing in Robert R. Church Park.

It grew from some African drumming in City Hall Plaza to a schedule of events, theme days, an international marketplace and entertainers with a $2.5 million impact on tourism. All events except the entrepreneurs’ luncheon are free and open to the public. Eighteen artists have been commissioned to create original posters saluting the honored countries.

The Aceys work year-round to attract corporate sponsors, assistance from state and local arts councils – it’s a constant problem and effort keeping the festival alive. Until the early 1990s, they relied on their own funds.

Recently AT&T, Arts Memphis, Memphis Convention and Visitors Bureau, Nike, FedEx and others have provided support. Africa in April has garnered recognition from both local mayors, the Tennessee General Assembly and even a call of support from President Obama. As associate director, Yvonne develops program ideas and manages press and schedules with a few part-time staff, volunteers and her husband as executive director.

Her steadfast attention to service is summed up in a quote she repeats by Jessie Jackson: “We realize we are all wrapped up in the garment of humanity and what happens to one happens to all.” For her steadfast commitment to education, community service and social justice, we honor Yvonne Acey as a 2012 Woman of Achievement for Steadfastness.