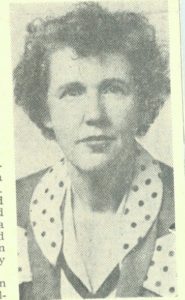 Born in 1907, Joan Fulenwider Strong spent the next 92 years living a full life at a fast pace, contributing to her community, working in her family’s business and raising a family.

In 1920 when Joan was 13, her family started a business, National Pressed Steel. Following in her mother’s footsteps, she joined the family business in 1938 at the age of 31. She served as president of Mental Health in Industry, a group in which was the only woman.

At the time of her death she was still active as a financial consultant and Vice President of National Pressed Steel. Not content to merely working as an executive in the steel company and raising her family, Joan became active in many civic organizations. By the time she entered local politics she’d been selected as one of Woman’s Home Companion ten national Women of the Year and as Woman of the Year by La Sertoma International.

From 1960 through 1967, Joan served in the Tennessee House of Representatives. During that time she cosponsored legislation to restore civil rights to the mentally ill and cosponsored the repeal of the so-called “Monkey Law” which prohibited the teaching of evolution in Tennessee public schools. A member of the Memphis/ Shelby County Safety Council, she worked for a law requiring newly manufactured cars have seat belts.

Joan worked during Mayor Ingram’s administration to get HUD programs and activities established in Memphis. She worked diligently with foreign students to assist them in getting their education. After World War II, she helped over 450 Holocaust survivors and displaced persons relocate to Memphis and the surrounding area. Joan always spoke her mind and said that she had “no reservations” about legislating consolidation of city and county schools and city and county taxes, issues that we’re still discussing.

Joan was a woman of tremendous energy. An article in the Press Scimitar in the spring of 1960 says, “In her spare time she looks after two Arkansas Delta Farms of 1,500 acres….. Mrs. Strong seems to manufacture spare time and is also active in the National USO and serves on the boards of the YWCA, the City Beautiful Commission, and was the Pilot Clubs Woman of the Year.

Joan had a lighter side as well. She loved hats. Her collection of over 450 hats included antique hats for women as well as a few hats for men. She is quoted again in the Press Scimitar as saying, “Hats are Good For Health.” She was pleased to make presentations on the topic and would bring along as many at 75 hats to display during these sessions. Her advise to women: “If you’re depressed, go out and buy yourself a new hat. It will make you feel better.”

As Joan Strong grew older, she maintained her energy and enthusiasm for life. She enjoyed celebrating her birthdays with bold feats. At age 83 she spent the night roaming the streets of Memphis on a motorcycle. At 85 she glided in an ultralight. She was quick to spin tales of family and about Memphis. She even knew Elvis and spoke of him as a “dear boy.”

She passed away in 1998. Joan Fulenwider Strong lived a life that is an example to us all. She served her community through hard work, consistent effort and with good humor and for that we honor her tonight.