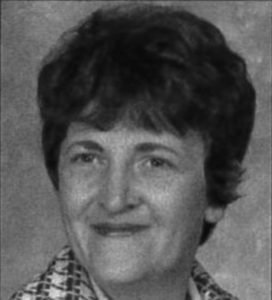 Barbara was born in Eaton, Ohio in 1938 and grew up there on a farm with five sisters. She became a nurse and married Allan Akehurst in the early sixties. After his death, she moved to Memphis with her two young children. In 1964 she married Frank Lawing. Together, the couple had three more children.

Barbara always believed strongly in equal rights for all and during the 1968 sanitation workers’ strike, these beliefs led her to take action. She and five other homemakers approached then Mayor Henry Loeb and demanded that he support the union’s quest for equal rights and equal pay for these city workers.

In the seventies, her belief in equality and justice for all took her to the forefront of the women’s movement. She chaired the Legal Status of Women in Tennessee Committee for the League of Women Voters and she served as Legislative Coordinator for NOW. In 1977 she was a delegate to the National Women’s Year Conference in Houston. A member of Women in Construction and the Coalition of Labor Union Women and Tennessee’s only delegate who belonged to a labor union, Barbara participated in the Labor Caucus.

She helped manage several pivotal campaigns including those of both Harold Ford Sr. and Harold Jr. A long-time friend of Al Gore’s, in 1992 she worked in the Clinton-Gore campaign. She was a mentor and advisor to many local politicians including City Council member Carol Chumney and state Representative Mike Kernell.

In a 1973 article in the Memphis Press-Scimitar she said, “The American housewife has so much to give and whatever her party preference, she should get involved. Political decisions often affect women and mothers more closely than they do men, especially local issues such as education. We need to have some say-so but we have very little.”

While committed to breaking down barriers and seeking justice, Barbara’s family was always her priority. Saturdays and Sundays were reserved for the family and during the week, she always tried to be home for dinner. Her goal was to attend only one evening meeting a week, but during political campaigns, all bets were off. When her children were young, she often bundled them up and took them along.

In the late seventies and early eighties, the family fell upon hard times financially. Realizing that higher education would be a means to greater earning power for her family, Barbara enrolled at the University of Memphis. Working through the University College, she earned both her bachelor’s and master’s degrees. She went on to teach economics for almost twenty years. She felt that athletes who attended her classes didn’t have the background they needed to be successful students, so for at least ten years she volunteered to tutor football players.

According to Carol Chumney, Barbara inspired her to “reach for her dreams.” A long-time friend said, “Barbara’s commitment in life was to women, to people of color and for people who were downtrodden, to make their lives better. Another said, “She believed in breaking down barriers, lived her values, and had a strong sense of social justice and equality for gender and race.” Following her death in 1998, Harold Ford Sr. said, “She was one of the warriors who went beyond race and said, ’I want what is right.’ She was just the greatest.”

Over the course of her sixty-eight years, Barbara Lawing worked tirelessly and passionately to seek justice and equality for all. Her life stands as an example and inspiration for women now and in the future.