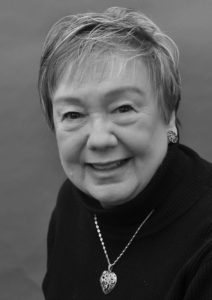 In 1979, Linda Miller was attending her first parole hearing as a newly appointed member of the Tennessee Board of Parole. She quickly noticed something was missing. Not a single person in the room was speaking for victims.

During her 10-year tenure, Linda made sure that victims were heard. She traveled the state, meeting with victims and their families, as well as other citizens, officials and the news media.

It wasn’t the first time Linda made sure that victims were heard. She began that work several years earlier answering a telephone in a Midtown church. The women on the other end of the line were victims of rape and domestic violence. The hotline – operated by the YWCA – was the first of its kind in Shelby County. Linda was a part-time employee – one of two women who launched the hotline.

That part-time job led Linda to a lifetime of public service, advocating for victims and working to reduce crime. After serving on the parole board by appointment of Gov. Lamar Alexander, she was appointed by then-County Mayor Bill Morris as administrator for the new Adult Offender Center in Shelby County, a $7 million, 600-bed adult male correctional facility. When Jim Rout was elected to follow Morris in the mayor’s office, he turned to Linda as interim deputy director of the $33 million Shelby County Division of Corrections. She was quick with her advice.

“We spend millions on inmates and we don’t spend anything on victims,” she told Rout. She proposed a center for crime victims. Rout agreed. Her idea made his 100-day plan. On day 99, she got a call to show up for a press conference the next day to announce the Victims Assistance Center. She made her idea a reality and launched the center, a hub for victim service agencies. The center was recognized nationally, and provided service to more than 4,000 families a year. In 1999, as executive director of the center, Linda was named “Victim Advocate of the Decade.”

Her path appeared to take a bit of a turn then, when she became executive director of the Ronald McDonald House in 2002.

“It may seem off my career path, but it really wasn’t,” Linda told a reporter. “Nobody expects to be a crime victim, just like nobody expects their child to get cancer.”

After five years dealing with families in medical crisis – and operating an 11-acre facility with a budget of over a million dollars – Linda returned to helping make our community safer when she joined the Memphis Shelby County Crime Commission as program executive for Operation: Safe Community and then as interim director and director of the Crime Commission. Its primary project now is Operation: Safe Community in which local government, business and other community leaders collaborate to achieve specific crime-reducing strategies.

When Linda Miller retired last summer from the Memphis Shelby Crime Commission, most of the officials and old friends who rose to pay her tribute at her going-away party joked that they expected to see her back on duty very soon. They were too well acquainted with her passion for community service work and too aware of the many roles she has filled over the decades to believe she could really go home to her grandchildren and mahjong tiles – and stay there!

Sure enough, by October, she was back in the saddle – taking on the interim executive director job for the Family Safety Center of Memphis and Shelby County. Linda came back to energize the project toward opening this summer, offering Shelby County’s suffering victims of family violence a single location combining civil, criminal, health and social services for victims of family violence.

The center is modeled after the successful Memphis Child Advocacy Center and is a strategy recommended through Operation: Safe Community. Linda’s enviable political savvy and capacity to forge and sustain durable working relationships with government leaders and bureaucrats, non-profit service providers and funders, politicians and pundits make her uniquely equipped to construct the partnerships that will make the Family Safety Center a model for the nation. Once again, Linda is providing a voice to victims.

When she steps aside from this job later this spring, many will again say, “Sure, Linda’s retiring!” because we know her heart and how plugged-in she is to this community’s needs. Through her steadfast service she has created and sustained projects that help the hurting and make us all safer. And, odds are, she is not done yet!