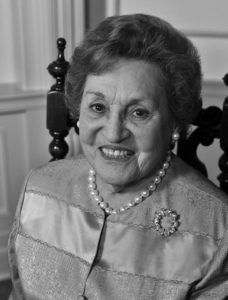 LaVerne Gurley was a young mother when, shortly after World War II, her husband suffered the first of several brain hemorrhages. A product of her time, she had no marketable skills. Knowing that she needed to help support her family and wanting a program that could be completed quickly, in 1951, LaVerne enrolled at the University of Tennessee Health Sciences Center in the Roentgen Ray Technology Program, now known as Radiologic Technology. She and husband had an eleven-year-old daughter and a son who was still a toddler, so her mother-in-law moved in to help. A year later, LaVerne received her certification and answered a calling that was to last over 30 years and would include a distinguished teaching career and research resulting in greatly improved health care for women.

When LaVerne began her career, nuclear medicine was in the early stages of development. One of her first projects involved studying cancer of the cervix, pap smears, blood counts and the impact of radiation. But that was just the beginning.

While doing research and teaching, she continued taking classes, receiving one of the first certifications in Nuclear Medicine in 1963, followed by another in Radiation Therapy in 1965. In 1973, she received a BA in Education from Northeastern Illinois University. Her life-long commitment to learning culminated in 1976 with a Ph.D. in Medical Education from Union Graduate School.

Luckily for women, LaVerne was interested in radiation-safe, cost-effective and diagnostically sound techniques for baseline mammography.

In 1972, while working for the University of Tennessee, she collaborated with DuPont in research that led to the development of the “low-dose mammogram,” which improved the safety of the procedure.

In 1980, she was the principal investigator in research on computer assisted mammography analysis. The project was funded by the American Cancer Society with the assistance of the National Aeronautics and Space Administration (NASA), one of the few organizations in the South that had the computer technology needed for the task. LaVerne traveled to NASA in Alabama to use their facilities. This work resulted in more accurate interpretation of breast cancer screening results.

In 1981, after 30 years with UT, LaVerne took her considerable talents to Shelby State Community College, now Southwest Community College, to direct the Radiologic Technologic program. A gifted lecturer and teacher, she was there full-time for eight years followed by five years of part-time service. She influenced countless students, before retiring as Professor Emeritus in 1996.

LaVerne has a long list of professional publications. She is co-author with William Callaway of the text Introduction to Radiologic Technology which is in its 6th edition in classrooms today. And LaVerne is working on the 7th edition!

While working, researching, teaching, and raising a family, she managed to belong to the League of Women Voters, the National Organization for Women and several school and church organizations. And more recently she’s been senior queen of the Mid-South Fair and a first place winner in the vocal group category!