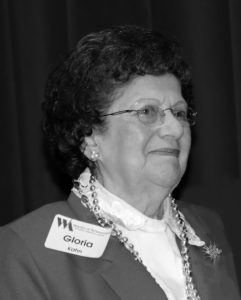 Gloria Kahn’s community leadership began with bandage rolling during World War II and continues in the highly technical and explosive push for embryonic stem cell research in 2009. In more than 60 years, she has advocated for people and ideas here and throughout the world.

“She has been a leader, not just by words, but by example,” said one nominator. Asked why she always worked on community affairs, while so many did so little, Gloria said, “Because it has to be done. Not everybody wants to take on some of the things I take on (because) they’re controversial or time-consuming.”

This child of Russian immigrants, born in Memphis, was imbued with love, respect for and appreciation of the United States by her parents. She won a citywide essay contest on “What America Means to Me.” She was in college at Southwestern (now Rhodes) when World War II was declared. Wanting to help the war efforts, she became a Red Cross Nurse’s Aide volunteering at the veteran’s hospital.

Marriage and two children led to volunteering as a Girl Scout troop leader – an acquaintance that later equipped her for a paid job as a field director and public relations director for the Tenn-Ark-Miss Girl Scout Council.

Her political activity began when she served as co-manager of President John F. Kennedy’s East Memphis campaign office. She served various leadership positions with the Memphis Women’s Political Caucus and the League of Women Voters and was a co-founder of the Public Issues Forum of Memphis, organized to bring greater advocacy for the Constitutional mandate of separation of church and state. She was its first president. Because of her passion for this issue, she was elected to the National Advisory Council for Americans United for Separation of Church and State. She was West Tennessee Vice President of the Tennessee Federation of Democratic Women.

For more than 50 years, Gloria has been a leader in Hadassah, the nation’s largest women’s volunteer organization. A member of a four-generation life-member family, she has served every position of leadership, including president, in the Memphis chapter and on the Southern Region Board. She also has been president of local and regional chapters of B’nai B’rith Women, the Anti-Defamation League and on the board of the Memphis Jewish Community Relations Council, Health Insurance Continuance in Tennessee and Beth Shalom Synagogue.

For 13 years, Gloria was chairperson of the Memphis Committee on Soviet Jewry, part of a national effort to give a voice to Jews and others who wanted to leave the Soviet Union but were denied visas simply because of their religion.

With the National Conference of Christians and Jews, she was instrumental in organizing the Interfaith Task Force on Human Rights and Religious Liberty. Through her involvement with Hadassah and Americans United, Gloria has taught others to lobby for issues in which they believe and she has led lobbying trips to Nashville and to Washington D.C. Former mayoral candidate Carol Chumney wrote of Gloria: “She would have been a fine candidate for office herself, based upon her knowledge, compassion, commitment, dedication and passion for improving our community. Yet, she chose to instead selflessly work to help other women, like myself, get their foot in the door in an arena in which women often struggle to gain equal participation.”

Despite repeated health challenges, Gloria Kahn remains devoted and dedicated to urgent causes. She almost single-handedly organized a community coalition to prepare and position legislation for state support of stem cell research. She only slowed that effort a bit last year after local legislators indicated that they were not ready to negotiate for it across the state! With new federal leadership open to scientific endeavor, she is ready with a revived campaign for Tennessee.

She helped plan and attended a reception for female state legislators in October even after another illness.

This champion of social change, of women’s rights, of progressive issues has steadfastly served our community as a leader on political, social and civic issues. And she’s not done yet! Gloria Kahn is the 2009 Woman of Achievement for Steadfastness.