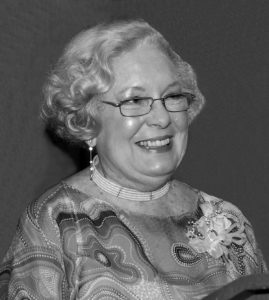 Carolyn Gates grew up sewing for 4-H contests and pampering her pet cow in Geiger, Ala., population 72.

When she was 59 and the comfortable wife of a successful businessman, she ran for mayor of Shelby County, population 830,000.

She was the first woman to run for county mayor.

Why would she do such a thing?

She says, “I always tried to show that if you care enough, if you work hard enough, you can do almost anything. My mission became to encourage women to think in terms of what is possible for them. If I can do it, other women can too.”

The journey from 4-H sewing contestant to mayoral candidate curved first through the University of Alabama business school where she met her husband-to-be Jim Gates. She planned to return to college after they married but that got put off until the three children were all in school. The family had located to Memphis so Carolyn earned a psychology degree, one course at a time, at Memphis State, graduating with honors in 1975.

She was her own contractor when she and Jim built their house in Germantown in the 1970s. “I was the quintessential volunteer – president of the PTA, president of the women of the church, a room mother. We were the family of the 50s, Ozzie and Harriet.”

But her eyes were opening.

“I saw so many areas where women should be serving and there were none, only men,” Carolyn says. “I found an amazing amount of skepticism about a woman, a wife and mother, running for public office.”

In 1977, when she first ran for Shelby County Commission, she recalls a “fairly typical” conversation with “one of our civic leaders.” After hearing Carolyn’s plan to run for office, he reared back in his chair, propped his feet on his desk, looked her in the eye with a benevolent smile and said, “Little lady, you are a nice, pretty little housewife. You’ve been happily married for 20 years. Now go back home where you belong.”

She was amazed that she was only the second woman to serve on the County Commission. Her husband got phone calls asking him to tell his “little woman” to do this or that. He firmly explained he didn’t vote on the county commission and his wife didn’t make real estate decisions.

Carolyn was a founding member of the Salvation Army Auxiliary and of Youth Villages. She was chair of the Salvation Army Advisory board and the Memphis State National Alumni Association. She was appointed to the Defense Advisory Committee on the Status of Women and to the state Commission on the Status of Women. She is a life member of the Shelby County PTA who has hosted benefits and fundraisers for more than 50,000 people in her home in the past 25 years.

After nearly 18 years in the county commission, Carolyn worked in financial services and real estate and continued to contribute articles to local newspapers. She has often spoken in defense of women who focus on home and community instead of career but urges all women to participate fully in life.

For her lifetime of standing up, speaking up and participating fully in Shelby County life, Women of Achievement salutes Carolyn Gates. Carolyn remembers a visit to a family cemetery long, long ago.

Graves of the men were marked with reverent epitaphs of their success as teachers, preachers, leaders and heroes.
Graves of the women said “Dear Mother of George and two Daughters” or “Loving Wife of Henry.”

“I suppose it didn’t need to be spelled out for us that these, too, were heroic acts,’ Carolyn says. ‘These women gave birth to the babies, nurtured the living and buried the dead (but today’s women) must carry on the responsibilities of the past (and) also exploit the talents and special qualities that women carry within them…

“Will the epitaphs of these women who change the course of history read ‘Dear mother of George and two Daughters’ or “Loving Wife of Henry?” Maybe, and there’s nothing wrong with that. It’s noble. But there is much more. So very much more. I’m reminded of the proverb that says, ‘If it is to be, it is up to me’ I believe it!”