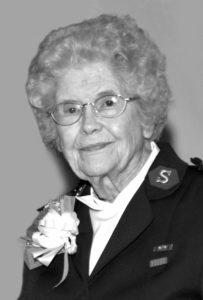 Born in Ohio in 1909, Gertrude Purdue came into this world serving others. Through six wars, the great depression, and the Civil Rights movement, she’s been, in her own words, a handmaiden to the Lord. Her energy and dedication have benefited countless people. She’s the first to arrive for a meeting and the last to leave. She has a smile that lights up the room and a Salvation Army uniform that still fits.

The oldest of seven siblings, Gertrude was raised in Michigan and Indiana. The daughter of Salvation Army officers, she was serving doughnuts to servicemen and veterans by the time she was 9. At age 13, she was helping conduct summer camps for disadvantaged children. In a recent interview in The Commercial Appeal, she said, “We were children of the regiment, and I had a flock.”

She became a commissioned Salvation Army Officer in 1930. In 1934, she married fellow officer Bramwell Purdue. They had two daughters and a son and raised a foster daughter. Together the two served in five cities in the Southern Territory for almost 30 years.

The couple helped form one of the first USO clubs and went on to direct several others. In the 50s, W. B. Purdue served as divisional secretary while Gertrude worked with nursing homes and hospitals.

They came to Memphis in 1962 to serve as Area Commanders. During their years of active service they helped develop a shelter for abused and exploited women and children. Gertrude worked to develop social services including senior citizens programs and with the Junior League, established one of the city’s first daycares for low-income families. Working with the Memphis Parks Commission, she and her husband helped create Golden Age Clubs, recreational and learning clubs for senior citizens that were so popular that the parks service later developed their own.

In addition to her work with the Salvation Army, Gertrude has been a part of Church Women United since the group began, serving as both state and local president. When Myra Dreifus called asking for help on behalf of the Fund for Needy Children. Gertrude organized a “sew in,” with 250 women sewing 2,500 garments. The “sew in,” now known as a “sew out,” still exists. Following Dr. King’s assassination, she helped organize forums to bring people together to open lines of communication and foster understanding and unity. And she served on the committee that formulated plans for what is now the Memphis Inter-Faith Association.

Gertrude was a board member, officer and advocate for the YWCA when it was first addressed issues of race and women’s equality. This was during the time that the Y was one of the only integrated groups in town.

In 1973, the couple retired from the Salvation Army, but Gertrude kept on serving. A founding member of the Women’s Auxiliary, she’s still chief recruiter. She organized an early discount program for seniors, and played piano at the Adult Rehabilitation Center for 29 years. And she’s still delivers doughnuts at the VA Hospital twice each month.

Gertrude has received many awards but one tops the list. In 2006, she received the highest international honor the Salvation Army bestows: The Order of the Founder is given for superlative service to its mission and ministry. Her photo hangs at Army headquarters in Atlanta and is inscribed with her name and the words “servant” and “encourager.”

Gertrude has remained active in Church Women United and the East Memphis Quota Club and helps keep others motivated and on track. She’s optimistic and believes in setting an example of love. She has said, “….You never know what seed you sow today will grow down the line.”

This May, Gertrude will celebrate her 98th birthday. We know that over all these years, she has steadfastly sown many seeds and continues to do so today. She is certainly an encourager and an inspiration for us all.