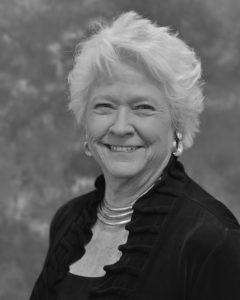 Barbara King turned a volunteer slot with a local children’s charity into a career dedicated to helping abused children reclaim their lives.

Under her steady hand, the Exchange Club Family Center has grown sevenfold into one of the premiere social service agencies in Memphis.

Barbara grew up in East Memphis and graduated from East High. After a year in a Texas university she came home to Rhodes College to graduate with a B.A. in psychology in 1970. Married to Bob King right after graduation, the couple settled in Atlanta, Georgia, where for five years she was the program director for a preschool program for children with mental and physical disabilities. She was drawn to special education early – her best friend’s brother needed it – so when the couple returned to Memphis, she earned a Master’s degree in Education, specializing in early childhood special education.

While her three children were small, she began volunteering and one volunteer placement turned into a job – doing fundraising and public relations at the Les Passees Rehabilitation Center for children with neuro-motor disabilities. She stayed there for five years and along the way, learned about an agency that was about to go under. Barbara had gained strong experience as a fundraiser so the challenge of rescuing the Exchange Club Center appealed to her.
Lucky for them – and for the abused children of our community.

In 1993, when Barbara got to the center, in dilapidated quarters on Elvis Presley Boulevard, the three staffers and three programs were aimed primarily at child abuse prevention. The local center, opened in 1984, was one of dozens founded and funded across the nation by members of the Exchange Clubs.

Barbara moved the center to better quarters, first on Walnut Grove and then to a building the agency purchased on Union Avenue in 1997 and expanded in 2007.

She says that it became apparent that children dealing with child abuse also were being damaged by domestic violence in their homes. “It was just real obvious that was a form of child abuse whether they had scars or not,” Barbara says. “Yet at the time, they weren’t even considered a victim – so I wrote a mission to provide those services.”

Now open seven days a week, the center offers comprehensive services for children traumatized by violence and abuse as well as their families. The staff offers individual and group counseling for adults and children; educational services such as parenting training for first-time teen mothers and others at risk for child abuse and neglect; anger management for adults, teens and children; play therapy for children as young as two years and Parent Child Interactive Therapy for children under age 7.

The center operates a carefully structured and monitored program for court-ordered supervised visitation to help families shattered by battering.
The Exchange Club center is one of the leading training facilities for students in the fields of social work, psychology, and counseling with over 80 undergraduate, graduate and doctoral level students from 8 local schools completing internship or practicums each year.

Today the Exchange Club Family Center- a private, non-profit agency – has a staff of 45, including a clinical psychologist and 19 licensed clinical social workers and counselors. The number of programs has grown from 3 to 23 providing services annually for over 5,500 children and adults who are involved in child abuse and family violence situations. About 10 percent of the center’s clients are from the Spanish-speaking community and are served by bi-lingual therapists.

Barbara saw the potential for broader services to bring healing and renewal to children who had no voice and were deeply injured by physical and sexual abuse and domestic violence. She has worked tirelessly to build relationships with corporate leaders, government officials and non-profit colleagues to find resources necessary to make innovative and important programs happen.
Her steadfast devotion to the needs of children traumatized by abuse has brought hope to thousands.