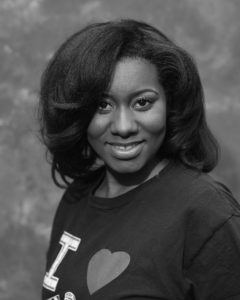 As a high school student Nadia Matthews saw many of her peers headed the wrong direction, hanging out in gangs, becoming involved with drugs, getting into fights. She was determined not to be one of those girls and took the initiative to make sure her life went in the right direction.

Nadia and some of the friends she’d had since middle school began discussing the many problems they were all facing. In 2007, Nadia was inspired to set up Lily Roze Foundation. Named after her two grandmothers, the foundation started as a means of bringing teens together to discuss and artistically explore the epidemics that surround them. But it has grown into so much more. The foundation’s motto is “We plant seeds so that the world can watch you bloom.” Nadia says, “I want to watch these children and teenagers bloom not just into successful parents, but into college-educated young adults. Blooming means branching out.”

Even as a child, Nadia was never one to shy away from a microphone, a stage, or a writing opportunity. Her youthful presentations included church holiday speaker, spelling bee commentator, high school news anchor, and school playwright.

As a teen, Nadia saw her first Tyler Perry production. It was the first time she’d seen an urban play catering to a black audience. It addressed issues that were real in her life. She was so inspired that she started writing her own play. The result, “A Ghetto Fairytale,” covered every situation a teen can possibly face, from drugs and alcohol to teen pregnancy.

She says, “We wanted to do a show-and-tell method. We were going into classrooms and talking. We really wanted to show them their life on stage and make it as realistic as possible. I wanted to help people and teach them because I knew they weren’t listening when we were talking to them.”

Due to a last-minute need for a change in venue, the show had a four night run of sold-out performances at LeMoyne-Owen College. She’d arranged to use the theatre for free by promising LeMoyne-Owen the proceeds.

Turned out to be a great deal for the college as it received $10,000, a large contribution from one of its youngest donors ever; a fact later recognized with an award from the college. Unfortunately, Tyler Perry forgot to tell her not to use real names so she ended up losing a few friends. She hasn’t made that mistake again!

Her success brought national attention to her work. Nominated by her sister to be a guest on the Tyra Banks Show, Nadia got the call while at Graceland, sitting in a Cadillac that once belonged to Elvis. Her appearance in March of 2009 helped her to promote the work of the foundation and gained her some international followers.

Nadia has continued to write and in 2013 wrote and produced “Bitter/Sweet 16”, which was presented at the Michael Rose Theatre on the University of Memphis campus.

The LilyRoze Foundation continues to thrive. Offering weekly Saturday workshops for summer, fall and spring, the program results in three performances per semester, allowing the young participants, ages 3-17, a chance to work through their stage fright and develop both their self-esteem and natural talents.

And Nadia Matthews thrives as well, having established a conglomerate enterprise, LilyRoze Inc. She is, of course, the CEO. She directs the Miss Prestige Pageant, is co-owner of BeDazzled Birthdays, and is the driving force behind her numerous efforts.

Entrepreneur, activist, motivational speaker, actor, writer, producer/director of films and stage plays, and founder and CEO of The LilyRoze Foundation, Nadia Matthews is indeed the epitome of Initiative.