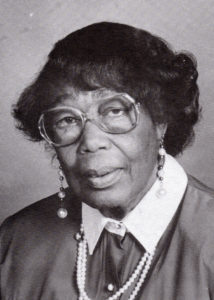 Alberta Gaines has dedicated her life to improving the lies of people across Shelby County. As a young woman from Port Royal, Tennessee, she first took her UT-Knoxville B.S. degree in home economics into Tipton, White and Hardin public schools as a teacher. Eventually she signed on with the Agricultural Extension Service and came to Shelby County as an extension home economist.

That easily was one of Shelby County’s luckiest days.

From teaching young people how to grow their own food in the Youth Service Garden Project to protecting consumers through her work for the Better Business Bureau, sewing clothes for needy children and sharing her expertise with the Mid-South Fair, 4-H and MIFA — Alberta Gaines has been a one-woman resource center for numerous organizations.

For 37 years she has worked through programs at Emmanuel Episcopal Church and other community groups to improve the lives of children and poor people. She has served on the Youth Service in Memphis board of directors since January 1967 and was voted a life member several years ago to ensure she could not rotate off! She also has been treasurer of St. Augustine’s Guild, an auxiliary group to Youth Service. Alberta has been active in Church Women United, American Red Cross, Northside Christian Center, Memphis Day Shelter and the Better Business Bureau’s fabric panel and general board.

Alberta retired in 1983 after 29 years with the Extension Service — but “retired” to Alberta means she has more time for community projects. She soon followed her curiosity to Habitat for Humanity. When she found the project had no paid staff, she kept the books, took in monthly payments, answered telephones and presented slide-show lectures about Habitat’s program of building homes through donations for low-income families. She became active on Habitat’s national board while also heading the local screening committee interviewing many of the hundreds of applicant families each year.

She is truly steadfast in her commitment to making her corner of the world a better place to live. If, as Queen Mother Elizabeth of the United Kingdom once said, service is the rent we pay for our space here on earth, Alberta Gaines has paid her mortgage for several lifetimes.