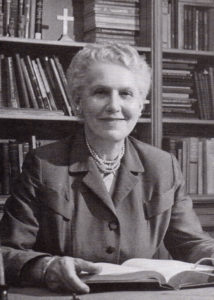 Now in her nineties, Ellen Correll has spent a lifetime working quietly for inter-racial and ecumenical harmony.

Born and raised in Memphis, she graduated Phi Beta Kappa from the University of Wisconsin in 1922. She spent the next two years traveling in Europe and working in New York. She then returned to Memphis to care for her mother. She began work for St. Mary’s Episcopal Cathedral and stayed for over 50 years, becoming director of religious education.

In the early ‘50s, Ellen served with A. Maceo Walker on the Tennessee Civil Rights Commission, which was set up on President Eisenhower’s order. The Commission was very unpopular in the white community and she received lots of hate mail. She promptly threw each letter away and, completely undaunted, she joined Memphis Public Affairs Forum, a group that met at the YWCA to promote racial harmony.

In the early ‘60s, Ellen was instrumental in organizing a series of luncheon meetings at which black and white women met to discuss community problems under the auspices of Church Women United. She also was part of a group of women and men, black and white, who met at the Sarah Brown YWCA to keep communication open between the races.

Ellen was active for more than 50 years in the American Association of University Women. She served as president of Zonta International and helped found the local and state chapters of Church Women United. Her quiet dedication to inter-racial harmony was recognized when the Links named her one of their five white women of the year. She was named the first “Valiant Woman” by the state unit of Church Women United. On her 90th birthday, the Women of the Church at St. Mary’s Cathedral set up a scholarship fund in her name.

Ellen Correll has quietly, graciously and lovingly served her church family, her earthly family, friends, students and our community at large. Hers is truly a lifetime of achievement.