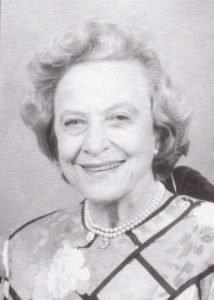 This quiet, modest woman has spent her adult years making life better for Memphis and Memphians, along the way affecting the entire nation. Championing the causes of better race relations, better social services and the arts, Selma Lewis has led with grace, sureness and compassion.

Always concerned with the quality of life for children, in 1964 Selma and her friend Myra Dreifus gathered 10 people together to discuss the development of a fund that would be used to purchase school lunches for children who would otherwise go hungry. Working with Vista Volunteers, Selma surveyed Memphians for their support. Their research found that thousands of children were unable to purchase a lunch. Armed with patience and determination, Selma and other volunteers were able to successfully overcome a lengthy legal battle that allowed the Memphis Board of Education to set up the Fund for Needy School Children. So successful was the undertaking that the federal government used it as a basis for today’s National School Lunch Program.

Interested in both the spirit and body of the child, Selma also founded the School Concerts Program, which brought the Memphis Symphony into the public schools.

In 1962 she became the first female president of the Jewish Family Service, an organization that provides social services for the Jewish community. Her growing concern for the homeless led her to champion the Memphis Coalition for the Homeless in 1977. The next year she went on to co-found the Mental Health Society of Memphis and Shelby County. During her 10 years on the board, Selma organized the Community Family Conference and was co-editor of the “Directory of Mental Health Services of Memphis and Shelby County.”

While working to improve her community, Selma also worked to improve herself. Having earned a bachelor’s degree from Vanderbilt in 1942, she returned to school at the age of 50 to obtain a PhD in American history. With Marjean Kremer, she co-authored “Historic Black Memphians” and “The Angel of Beale Street: A Biography of Julia Ann Hooks.” Currently she is at work on a “History of the Memphis Jewish Community, 1840s – 1960s.”

Independently nominated for this award by several groups as well as individuals, each nomination speaks of Selma’s modesty and willingness to give others credit. Selma Lewis’ steadfastness in serving Memphis, in helping those in need and in recording the history of our community truly makes her a “woman of achievement.”