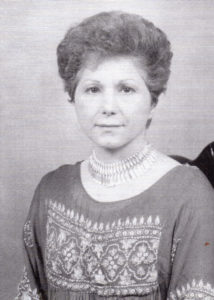 Parvenah “Peri” Motamedi was born in Tehran, Iran, in 1944 during the reign of the Shah. After graduation from high school she worked for the Shah, collecting and illustrating press clippings. But her picture of a woman’s future was very different from what Iran’s Muslim society dictated, and that is where her long struggle started.

After being humiliated by some family members and friends because of her ideas about life and the arts, she left her home country to come to the United States to build her dream. She could speak no English.

In 1965, she began three years of study at Monticello Junior College in Illinois, followed by a year at Washington University in St. Louis. After a marriage, a brief return to Iran and the birth of a daughter, she came to Memphis. In 1975, at age 31, she entered the Memphis College of Art, earning a B.F.A. in panting in 1977. She has not slowed down since.

Rather than be a “starving artist” and waiting for a gallery-goer to buy her work, Peri purposely identified a marketable craft that people would buy, freeing her to pursue her real love — fine art. Her commercial stained glass firm, Motamedi’s GlasArt, is now 15 years old and employs four other women. Her stained and leaded glass designs are found in homes, businesses and churches. But, she says, “I never tried to get big in business. My heart and effort was in fine art and teaching.” Her love for sculpture sends her out in her pickup truck to rescue junkyard metals for skillful transformation under her welding torch.

Yet Peri gives much more than her art to our community. She has taught art to children at the Jewish Community Center and YWCA, to adult mentally ill in a rehab program at Lowenstein House, to Girl Scout leaders, and students at Shelby State Community College and Memphis State University. Peri regularly contributes art for causes, such as WKNO, Playhouse On The Square, and the Orpheum. She also volunteers time with 12- and 13-year-old students at Rozelle Elementary School to encourage them to draw or paint their feelings to music.

In 1990 she conceived and funded a very special art project. The Memphis Arts Council administers the $3,000 Visualization of Music commission, which selects an artist or artists to create work based on a piece of music selected by the Memphis Symphony conductor. The art then is unveiled at a symphony art-and-music performance featuring the selected music.

Peri Motamedi travelled thousands of miles and across cultures to build her dream of a free life and artistic expression. The success of that dream is a tribute to her initiative and talent.