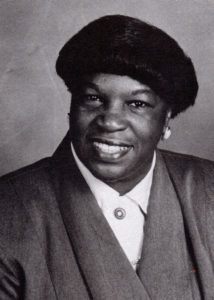 In January 1984, at age 37, Franketta Guinn left her secure job with Shelby County Health Care Center to start Metro Home Health Care. Originally employing three people, the business now employs 58 and has in the past year doubled both patient visits and revenue.

One of nine children, Franketta has always “leaned toward non-traditional fields.” In the ‘60s she was active in the local civil rights movement. She graduated from Wayne State University in Detroit, with a Bachelor’s degree in health, recreation and physical education. She coached high school basketball, taught elementary physical education, and was a swimming instructor.

In the late ‘70s, Franketta returned to school to become certified to teach health and discovered the growing need for health care administrators. She entered a Master’s program in that field and in 1977 joined the Shelby County Health Care Center. There Franketta met many older people and their families. She saw that when the elderly are taken from their homes they can become confused and that hospital environments are less conducive to healing than are familiar surroundings. She realized that staying in the home surrounded by family and friends could greatly improve the quality of life for a growing population of aging Americans.

Since Franketta always wanted to own her own business and continue her work with geriatrics, she put these ideas together and came up with Metro Home Health Care. After involved licensing procedures, the company was set up and Franketta obtained her first patient — her father. That first year, Metro Home Health Care made 1,200 visits. This past year, that number had grown to 15,000.

Franketta Guinn defines success as “being all you can be at any one point in life — every time there is an opportunity to do better, you should.” Her initiative to redirect her talents has meant more peace and freedom for hundreds of senior Memphians.