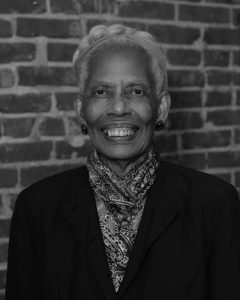 Maxine was always told by her mother “Remember who you are. You are loved, you are valued and you are enriched by the people in your life.” She knew the history of her family and its struggles and understood early that she was defined by family, not situations outside of herself.

In Beckley, West Virginia, Maxine was born with very poor vision. The family moved to Cleveland, Ohio, where, at age 10, Maxine saw legendary African-American dancer and choreographer Katherine Dunham dance. That performance led Maxine to a life-long passion for dance.

At her request, her parents enrolled at Cleveland, Ohio’s Karamu House, one of the oldest African-American theaters in America. She exhibited great talent, always dancing without her usual Coke-bottle glasses, barely able to see the stage and other performers.

In recognition of her talent, at age 16, she was chosen to study and travel to Haiti in a program sponsored by her inspiration, Katherine Dunham.

Her parents wanted her to attend Fisk University, which had no dance program. Exhibiting further initiative, while at Fisk, Maxine worked for two years cleaning houses and then, using her savings, went to Europe, studying in Denmark and Germany. Back in the states, she worked with dancer/choreographer Bob Johnson’s Pittsburgh Black Theatre Dance Ensemble.

Maxine then returned to Cleveland and Karamu House, where she danced with several modern dance troupes while obtaining a Bachelor’s degree at Case Western Reserve. She married and had a daughter, Dawn Rebecca, at age 23, but the marriage was short-lived.

But Maxine never gave up her passion. In 1973, she was one of the organizers of the First National Congress of Blacks in Dance. Maxine continued to dance, to teach dancers, and be actively involved in the Memphis arts community for the next several decades through groups such as the Harry Bryce Dance Theatre, the Memphis Black Arts Alliance, and Project: Motion. All of this in spite of her poor vision and later-diagnosed hearing problems.

While dancing with Harry Bryce, she came to be called Silverbird, a name that has graced many dance programs.
The year Maxine turned 75 she asked Project Motion if she could choreograph a piece in an annual show. Not only did they agree, they asked her to produce the entire show. 75 Rotations: Celebrating Maxine Strawder’s Passion for Dance had three sold-out performances. All profits went to the Project: Motion Maxine Strawder Dance Enrichment Scholarship at the University of Memphis.

While in Cleveland she fought blatant housing discrimination and participated in marches and sit-ins for civil rights. In Memphis she continues to participate in social justice activities.
At the age of 80, Maxine keeps limber with dance classes and by teaching tai chi. She continues her studies at the University of Memphis as a perpetual scholar of the arts, languages, history, and world cultures.

“Dance is a universe unto itself,” she says, “It’s not only taking care of your body. It’s taking care of your mind. It’s a worldview.” Reflecting on her life, she said, “Both my mother and grandmother lived to be 96 years old, both faced many obstacles in life, and both possessed a loving fierceness. They instilled that in me.”

Women of Achievement salutes Maxine Starling Strawder who continues to take initiative to overcome obstacles and inspire others with her talent and passion.