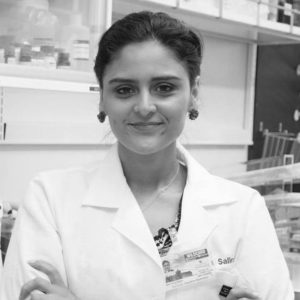 Gabby Salinas’ story of survival and heroic devotion has been told all over the world. She was brought to the United States from Bolivia by her father at the age of seven, unable to walk, to be treated for cancer, but the family was turned away from a leading New York hospital after they were unable to pay for her treatment.

Without specialized care, Gabby did not have long to live.

Lucky for them that actress Marlo Thomas, daughter of St. Jude Children’s Research Hospital founder Danny Thomas, read about them and immediately faxed the story to Memphis. Two days later Gabby and her dad, a Bolivian Air Force pilot, were flown to Memphis courtesy of St. Jude – where no patient ever pays.

The medical team at St. Jude fought the Ewing sarcoma – pediatric bone cancer – in Gabby’s spine, helped her learn to walk again and saved her life – and not for the last time.

Gabby has survived cancer three times, suffered the loss of her father and younger sister in a horrific car crash, works as a scientist to discover new drugs to treat ravaging diseases and ran for the Tennessee State Senate – and she is only 30 years old!

Thirteen months after the Salinas family arrived at St. Jude, as they drove on Interstate-40 northeast of Memphis, their car crashed. Her father and sister were thrown from the car and killed. Her pregnant mother was paralyzed.

She was diagnosed twice again with cancer and again was treated at St. Jude – in 2003 and 2007. In 2010, still a college student, she joined the St. Jude Department of Chemical Biology and Therapeutics. She also helped establish “Danny’s Dream Team,” former St. Jude patients who run races that raise funds for St. Jude in honor of founder Danny Thomas. In 2010 this woman who once lost ability to walk participated in her first half-marathon to raise money for the hospital.

Acutely aware of the urgent need for access to health care and medical insurance, Gabby lobbied in Nashville for expansion of Medicaid after the passage of the Affordable Care Act in 2010. She watched helplessly as her state senator ignored his own Republican governor in shooting down the effort. She later saw the rural hospital that had treated her injured family members close.

It all sparked her political awakening which led her to run in 2018 for her state senator’s seat in Senate District 31: Cordova, Germantown, east Shelby County and Hickory Hill. She defeated two opponents to become the Democratic nominee, facing a nine-year incumbent in a solidly-Republican district.

Gabby became the target of $369,000 in negative TV, radio and direct mail ads in a fear-mongering campaign funded by huge companies and a conservative political action committee, aided by Tennessee’s lieutenant governor. The ads painted Gabby as a dangerous radical and featured images of masked men representing criminal immigrants.

When Election Day ended, the incumbent had only 1,520 votes more than Gabby.

After almost a year of campaigning, she has returned to writing her thesis in Pharmaceutical Sciences for the University of Kentucky.

Gabby is a true hero. She has certainly been tested and her spirit shown – in print, television and online – as a heroic model over and over again. We salute Gabby Salinas as our Woman of Achievement for Heroism 2019.