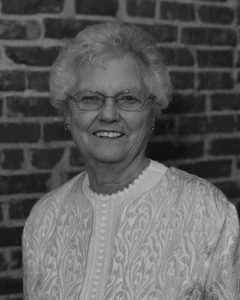 Jane Hooker was a mother of three and pregnant when she entered Memphis State University in 1961. Now 81, she really has never left the university in spirit. And the change she led while there – to revive and develop intercollegiate athletics for women, to teach and inspire generations of teachers – is legendary.

It’s hard to believe now, but beginning in the 1930s to 1972 when Title 9 became the law, many American colleges and universities provided no intercollegiate athletic programs for women. While 1920 to 1930 could be considered golden years for women athletes, concern grew that young women should be discouraged from serious competition. Among many reasons, women were considered too emotional, too likely to cry or faint. So higher education ended intercollegiate sports for women.

Instead, women athletes joined the Association for Intramural Athletics for Women. This meant no school funding for team uniforms, team travel or coaches. Young women athletes would stand at the doors collecting money after boys’ games so they, too, could participate in the sports they loved. Their coaches worked for free.

Jane, a self-avowed tomboy, spent summers playing sports at Cliff Davis Park and, as a teen, competing thanks to the YWCA’s Y-Teen basketball program.

In 1956, while still at Messick High School, Jane married the love of her life, Joe Hooker. She became pregnant with their first child and hid her pregnancy until after graduation. Soon she was the mother of four.

But Jane always knew that she would go to college. And go to college she did.
When she enrolled part-time at then-Memphis State in 1961, she majored in Health, Physical Education and Recreation. With children at home, she prepared meals, checked homework and did her own before rushing off to classes. She earned a Bachelor of Science in 1968, followed by a Masters in 1969.

She played basketball and badminton, coached by her mentor and nominator the legendary Elma Roane. She was Head Coach for Women’s Volleyball from 1970-1972.

But her real love was teaching so she left coaching to make the long commute to Oxford to earn a PhD at the University of Mississippi, completed in 1988. Through that time, she continued to teach teachers at Memphis State, making sure that they understood the importance of movement for kids in the classroom and through sports and games.

Jane was always passionate about young women being able to compete in college sports. In 1969, Elma Roane, Jane and several women across the state started a Tennessee Women’s Sports Foundation. Their mission was to provide intercollegiate varsity sports for women. They succeeded. Other leadership positions included presidencies and board memberships in state and national athletic organizations.

Her interest in providing sports opportunities for children led her to accept responsibilities in AAU Junior Olympics and Special Olympics. She wrote four text books for her classes and 50 biographies for the Sports Chapter of “A Bicentennial Tribute to Tennessee Women 1979-1995.” Recipient of countless awards, she taught and held UofM administrative positions until retiring in 1998.

But retirement isn’t a word to describe Jane, who turned 81 this month. She was an adjunct for years, compiled a History of Messick High School and co-wrote a history of Cordova. And for 17 years, she and her late husband gathered and delivered food, toys, generators, and school supplies for the families of Laguna San Ignacio in Mexico.

Jane is an active member of Bethany Christian Church and has written its history. She is a proud life-time member of the University of Memphis Alumni Association and until recently could be found in the stands rooting for the Tigers. One final thing: Don’t try to beat Jane at tossing free-throws. You won’t win.

Jane Hooker thanks the YWCA for keeping sports viable for young women prior to Title 9 and Elma Roane for being her mentor. Women of Achievement thanks Jane for her steadfast life.