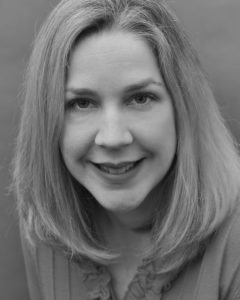 Jenny Odle Madden was in her first play with a speaking part in third grade – a Thanksgiving program at a Florida elementary school. She began then to find her voice in the theater and – lucky for Memphis – she never quit.

In junior high in Texas and then at White Station High School, Jenny sought out the competitive speech and drama clubs. With her BFA in performance from the University of Memphis, Jenny joined the Playhouse on the Square resident company and won awards for her acting. She also served in development jobs, did voice-over work and has worked a bit in film.

A narrative theater piece by University of Memphis professor Gloria Baxter and her students inspired Jenny to look at Southern women’s writing as a source for a stage piece that might win her and a friend a spot at the Fringe Festival in Scotland. The students had used Eudora Welty’s often-humorous stories.

Jenny says, “I’m a comedian by nature. I said, ‘hey why don’t we find a couple of short stories and go to Edinburgh?’” They worked from May 1995 using stories by Welty and Bobbie Ann Mason and raising money under Jackie Nichols and the Playhouse on the Square. When they needed to name their enterprise for a grant application, they came up with Voices of the South. In August 1996 they made the trip to Scotland for two weeks.

“The company is now 16 years old,” Jenny says, “and now it means all kinds of voices. At the time it was two girls who wanted to go to Scotland! My whole thing was – I want to perform.”

After enduring her parents’ divorce when she was very young, she saw her mother persevere and stand strong. Compared to that, she says, “a theater company is easy. Why can’t we do this? I just kept on. If I heard ‘no’ I turned it around to ‘why not?’”

In 1998, she applied for non-profit status and she became executive producer, a post she held until December last year while also performing regularly.

Voices of the South got a big break in 1999 when Gloria Baxter was asked to create a piece from the journals of Wyoming environmentalists Olauf and Mardy Murie. She collected some of her former students who all became part of the Voices of the South for the Wyoming project, which was performed in 2000 and 2002. During those years the company galvanized into a bigger group, adapting original texts with Southern flare.

The company has done 30 to 40 original scripts since then, including a commissioned piece that they toured across Alaska in December 2010.

One of the most popular shows is Sister Myotis’s Bible Camp, which in June 2010 became the first Memphis theater production to perform off-Broadway in a four-week run at the Abingdon Theater. Jenny performs as Sister Ima Lone in the Sister Myotis stories which are actually three full-length shows featuring a devout and over-the-top church lady who cautions Christians against the evils of thong underwear – among other gospel lessons!

Jenny’s world changed last April when she had surgery for lung cancer. She made the decision in December to step down as executive producer, remain a company member and have more time for her two children and to maintain her part-time job as theater director at St. Mary’s School.

“What a great testament to me and to them that Southern Voices can survive,” Jenny says. Anyone with a project can come incubate their work. “It’s for everybody.”

Accolades continue to come. Cicada, written by Voices of the South artistic director Jerre Dye, is the winner of the 2011 Bryan Family Foundation Award for Drama from the Fellowship of Southern Writers. Set in rural Mississippi, this coming-of-age ghost story is deeply rooted in the life of a small Southern family on the verge of transformation.

Voices of the South began as a creative way to launch a fun trip and it has persevered and thrived as an ever changing, growing enterprise that showcases excellent talent and entertainment.

Jenny Odle Madden is a gifted performer, whose talent could have taken her to New York or Hollywood, but she is committed to doing this art in Memphis.
Thanks to her – and her artistic and business skills – we have a robust and ever-surprising theater company especially attuned to Southern voices.