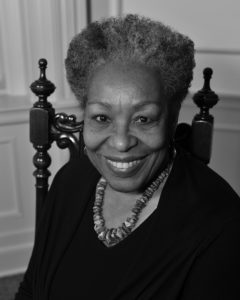 If ever a life story defined initiative – it is the story of Sonia Louden Walker.
Teacher, social worker, TV personality, community activist, nonprofit executive and now ordained minister – Sonia Walker has built and rebuilt herself in distinct careers that make perfect blended sense within the basic deeply held values that define her.

Community healer, bridge builder, connector and encourager – these too describe this remarkable, vivacious and gifted woman. It doesn’t really matter to Sonia Walker what the job title is – she will make it into what it needs to be in order to be of good purpose.

Her good friend Nancy Bogatin wrote: “Her persona incorporates a sensitivity which transcends her ambition and yes, a spirituality which, without imposing it upon others, she shares, often soothing, always smoothing the way for so many who come within her aegis.”

When Sonia Walker arrived in Memphis in 1974, mother of three sons and wife of the new president of LeMoyne-Owen College, she had already had a career as an educator and social worker in school, hospital and agency settings. And she had enjoyed three years that she described on her resume as “home administrator. . .not gainfully employed” but engaged in “family launching.”

In Memphis, she took a job as director of community relations at WHBQ-TV, beginning a 16-year term as manager of public affairs programming and community service projects for the ABC affiliate. She served on public boards, hosted “A Closer Look” and delivered editorials, effectively addressing social issues and solutions. Sonia was not just another pretty face on TV — her fingerprints are on innovations from Adopt-A-School to Food for Families as she used that job to lead community solutions across the spectrum.

In 1990 and 1991, she coordinated the Black Family Reunion Celebration in a nine-state area. Seeing another need among the 7,000 members of her church, she created a spiritually based, culturally sensitive counseling program at Mississippi Boulevard Christian Church that within a year had a building of its own. Out of a lifelong commitment to education and children, she staffed and equipped the first office of Partners in Public Education and continued to lead the non-profit school reform and funding program for five years.

Along the way Sonia served on numerous community boards and advisory committees – from the Chamber of Commerce to the Literacy Foundation to the Memphis Jobs Conference and the National Conference of Christians and Jews and beyond. She is a founding board member of Leadership Memphis and was the first woman and the first person of color to chair it. She is an honorary trustee of the Community Foundation of Greater Memphis.

She did all this while supporting the independence of her husband, Walter, who was diagnosed with MS just three years after the family moved to Memphis from Chicago.

Having flirted with the idea of religion studies for years, in 2002 she entered Memphis Theological Seminary part-time, vowing to complete her studies slowly, with no student loans — but before she turned 80!

Two years ago, she graduated from Memphis Theological Seminary and was ordained by the Christian Church (Disciples of Christ). This daughter of a minister in Columbus, Ohio, finally fully assumed the ministry she had felt and lived since childhood.

Sonia has excelled in a half-dozen fields and in all she found ways to use her unique talents and skills for the benefit of others. For her unending, passionate, discerning, gracious service to our community, we salute Sonia Walker, 2010 Woman of Achievement for Initiative.