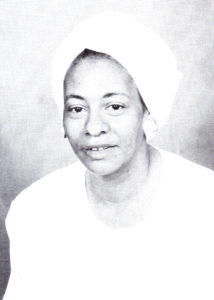 Sarah Clayborne may be the 1990s quintessential mom and apple pie woman. Known as “The Pie Lady” in Memphis, hers is a story of personal commitment and initiative that has caught the hearts of the readers of People magazine, actor Tom Cruise, talk show audiences and just about everybody who knows her story of struggle.

“Sometimes I wonder what all this attention’s about,” she said. “All I did was try to make a living for myself and my daughter and grandbabies.”

Sarah, 44, is a cook who has worked for several well-known restaurants in the city. She no doubt would have continued working in relative obscurity had it not been for a robber’s bullet which struck her daughter in the head in 1987, leaving her paralyzed and helpless. Eugenia Binkins was 18 at the time, had one young son and was six weeks pregnant. She spent her entire pregnancy in a coma, later giving birth to Ahab, who now is five.

To raise money to meet the family’s mounting medical and living expenses, Sarah began baking pies on the side. In 1989, when she lost her job as head chef at a restaurant and nightclub in a dispute over work hours, Sarah decided to launch a full-time business making the pies she learned to bake as an eight-year-old child at her grandmother’s side. Early success led her to open a restaurant in an old house in a rundown South Memphis neighborhood, not far from the Mississippi River. Although she was gaining a steady reputation as “The Pie Lady,” these weren’t easy times. Her home had burned in 1987 and needed repairs. Then her restaurant, including supplies and equipment, burned before she opened the doors for business. She had to make repairs. Then in 1991, her home was burglarized. Even her daughter’s wheelchair was stolen.

Despite the setbacks, she opened her business on Florida Street in January 1991 on little more than a prayer. The menu included soul food and, of course, pies. “I didn’t have any money but I could see my little building and I did have a vision,” she said.

She raised her price on her pies from $10 to $12. A lot of people told her she wouldn’t sell them at that price, that people wouldn’t go to her restaurant in the decrepit neighborhood. Both warnings proved wrong. Sarah’s reputation soared when production crew members filming The Firm learned about her restaurant and began frequenting the place to eat chicken pot pie, smothered chicken and dressing, mixed greens, candied yams and — of course — those pies. Tom Cruise came by one day and ordered a piece of Cherry Royale. He bought a whole pie to go. Director Sydney Pollack one day tasted Sarah’s Glory Hallelujah pie. He left a $100 tip.

Sarah says sometimes she can’t believe how far she has come. She credits her grandmothers and many African-American cooks for her baking talents, and untold numbers of Memphians who have supported her business endeavor. “I couldn’t have kept going,” she says, “without the help of a lot of wonderful people.”

Sarah now employs several people and has a new dream: to use some of her pie proceeds to open a center for indigents.

Clayborne has baked her pies for charities such as Youth Villages’ Soup Sunday and Phineas Newborn Family Foundation. In addition, she has worked for the Center for Independent Living and created the Saveahoe Foundation to provide job training to prostitutes.

Sarah passed away in Jackson, Tennessee, in June 2020.