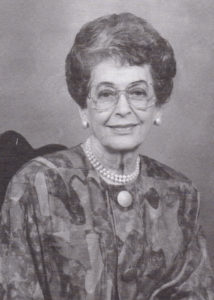 Josephine W. Burson, the daughter of Lithuanian immigrants was taught by her parents that America is the land of freedom and opportunity and that there is an open door for everyone.

Josie’s involvement with the Democratic Party began in the traditional way — she did her share of telephoning and mailings. She went on to head the Democratic Women’s Committee to elect Senator Estes Kefauver. Despite opposition by the newspapers and with her hard work, Kefauver won the election, ending a long hold on politics in Memphis by the Crump forces. She also headed the Women’s Division of the Tennessee campaign for the national Kennedy-Johnson ticket.

Prior to 1960, political campaigns in Memphis had been just as segregated as water fountains and restaurants. The Kennedy-Johnson campaign signaled an end to that division. The campaign was being conducted by an integrated group, but when it was announced that Lady Bird Johnson would appear in Memphis, it was assumed that there would be two meetings as there had always been — one white, one black. Josie, however, refused to participate in a segregated event. At that time the only place that would accommodate an integrated meeting was the MWCA, which was too small. Challenged to find a larger location, she succeeded in signing the first contract for the newly-renovated Ellis Auditorium. Thus began a new, more open era in Memphis.

Josie was the first cabinet appointment announced by Gov. Buford Ellington and she served as Commissioner of Employment Security from 1967 to 1971. As a volunteer in Hadassah, Burson rose from chapter president to national vice-president. In these positions she has worked for the welfare of the State of Israel. Since 1981 she has been an employee of Senior Citizen Services, where she has worked with the deinstitutionalized elderly.

In 1975, Josie was selected National Mother of the Year by American Mothers. The 50th mother to make a presentation, she spoke movingly of being a first generation American. Her parents came to America seeking the American dream and their children achieved it. Taught by her family the history of persecution of European Jews, Josie Burson has worked with courage to live in a land where persecution of any segment of the population should never occur.