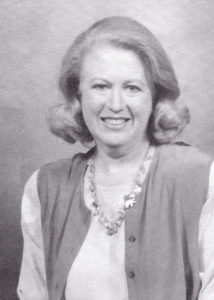 In 1968, Memphis was a focus of the nation’s turmoil following the death of Dr. Martin Luther King, Jr. Jocelyn Dan Wurzburg stepped forward to take constructive, courageous action in our city.

Jocie became familiar with an organization in other cities called the Panel of American Women, and she single-handedly brought its services to Memphis. The Panel’s purpose was to eliminate racial and religious prejudice by going before groups to tell personal stories, answer questions and share outlooks. In 1990 this might seem tame, but in 1968 and the years thereafter, it was a tough assignment. Many groups took personal issue with the message and the messengers.

Jocie Wurzburg headed a group of about 40 women — black, white, Catholic, Jew, Protestant — who labored to learn new skills and educate each other on issues. Some of the Panel went with Jocie to the mayor’s office to lobby for reason in the volatile atmosphere. This effort made Time magazine, albeit derisively. The story reported on “housewives in white gloves …”

The Panel led her into other human rights work, including project director for the Memphis Martin Luther King Memorial 1976-77 and service on the Social Action Commission, Family Life Committee and Consultation on Conscience biennial sessions of the Union of American Hebrew Congregations. She was appointed to the National Commission for the Observance of International Women’s Year and to the State Advisory Committee of the Civil Rights Commission.

Although the Panel of American Women ended service in 1980, Jocie Wurzburg’s work as a lecturer on equal employment and human relations continued and her career as a lawyer and divorce mediator began. Never one to stop organizing, she directed her love of music to the founding of the Jazz Society of Memphis.

It was not easy for this one-time East Memphis homemaker to become an activist — but an activist she was. The Panel of American Women was a courageous force in our city during those years. It was quoted, called upon, cited as a positive force. As her nominator said, “Jocie made all of that happen. She never got discouraged. She never let her energy flag.”

Jocelyn Wurzburg received the Shelby County Diversity Award in 2008. She also won the NAACP Life Time Achievement award in 2017. Later that year, Planned Parenthood awarded her the Judy Scharff Award for the Panel of American Women. The Tennessee Human Rights Commission established the Jocelyn Dan Wurzburg Civil Rights Award in her name. Today, she offers Mediation Services as a saner way of dealing with conflicts.