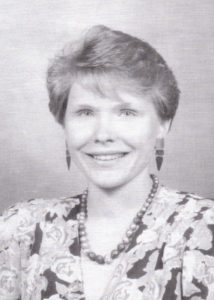 Anne White is a rape victim who heroically fought back and spoke up.

In 1991, at the age of 26, Anne was a Memphis City Schools teacher and past director of the Memphis Urban Mathematics Collaborative. Her love of math, statistics and teaching kept her busy on the public speaking and grant-writing circuits.

Early one October morning her world was suddenly changed when she was brutally assaulted at gunpoint in her East Memphis home by a man who had stalked her for several weeks. After a two-hour assault, he tied her with telephone cords, gagged her with pantyhose and shut her in a closet. Her 17-year-old rapist said he would be coming back to return her car, which he said he was borrowing.

Left in the closet, Anne tried to calm herself with mundane thoughts as, inch by inch, she pulled on a loose end of the cord. After four hours she was able to free herself and half roll, half hop out her front door and to the street to seek help. A passing neighbor stopped to help. Before Anne got in the car, she had the presence of mind to close her front door and pick up the telephone cords so the rapist wouldn’t know she had escaped.

That was just the beginning of Anne’s battle to regain control of her life and to fight back against the man who assaulted her. Her attacker did return in her car. With the help of alert neighbors, the young Arkansas parolee was caught the same day. Anne’s description and evidence helped police make the arrest. Then she painstakingly helped authorities make their case against the young man.

After the trauma of the rape and an aftermath of nightmares, Anne had to deal with many trips to court. But she was determined to see it through. The prosecutors gave her veto power over plea bargaining negotiations. Finally, her attacker pleaded guilty and got a 20-year prison sentence.

The need to act heroically didn’t stop there. Anne White has stepped out of the secret, silent world of rape victims to speak publicly about her experience. In a front-page story in The Commercial Appeal, she talked frankly about what was done to her, how it injured her life and how far she must go to reclaim her life.

“I kind of want my little moment of acknowledgement that I survived this,” she said. “This happened and it was horrible. Let’s just put it out on the table, learn from it, and move on.” Anne has a new job and is slowly working her way back into a normal life. And she is working on ways to teach people about rape and rape survival.

Anne White heroically stepped out of society’s shadows to shine light on the crime of rape and its effects on victims’ lives. All of us are indebted to her.