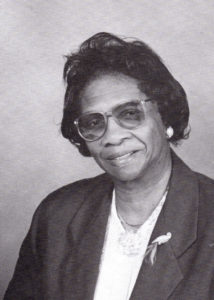 When Viola Harris came to Fayette County to attend high school in 1947 she saw that education for blacks was separate and unequal. Materials were outdated, facilities inadequate, and there were not enough teachers per students to ensure quality education. Black children attended on staggered terms in order to pick cotton, returning after the harvest, having forgotten much of what they learned prior to the interruption.

Viola saw that blacks were discouraged from registering to vote, too. She knew in her heart these things were wrong.

After she married in 1950, she was determined to create a community in which her children and people of all races and backgrounds could realize their full potentials. In the 1960s, she labored fearlessly for black voter registration. She helped desegregate lunch counters and public schools, helped bring Head Start to Fayette County, and worked for the appointment of black citizens to the county Board of Education. Her actions were unpopular with many in the racially divided county. More than once she had to pull her children to the floor to protect them from gunfire.

Denied gasoline and other necessities, and under the threat of violent consequences, Viola frequently had to drive to Memphis to acquire supplies for Fayette County residents. Seeing that many families lived in shacks with no plumbing, she worked to ease barriers to the poor in obtaining loans from the Farmers Home Administration. She worked with others to build a much-needed community center. Through her persistent efforts, TVA and Memphis State University began providing leadership and entrepreneurial development programs for the county. In 1987 she was the first woman and black to run for a position on the Board of the Chickasaw Electric Cooperative. Although she lost the election, her campaign turned out the largest vote ever for the contest and has resulted in the cooperative becoming more sensitive to the needs of the community.

Viola is a member of the original Fayette County Civic and Welfare League and serves as president. She also is executive director of the Fayette County Commission on Aging. This allows her to set up survival networks for isolated older residents who often have limited incomes and no transportation. Her work has been recorded in two histories of the Civil Rights era: “Our Portion of Hell” and “Blacks in Tennessee: 1791-1970.”

She has paid a tremendous price for striving to achieve justice and equal rights for all. In her heroism, Viola McFerren has retained what a nominator called a “remarkable reconciliatory spirit.” She has worked quietly but tenaciously to get work done.