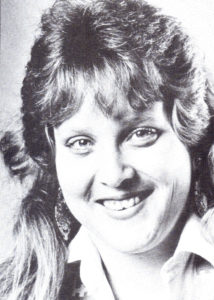 Shirley Baliss came to Memphis in 1987, after her first episode of manic depressive illness. She was 15. She came to live with a friend and to make a new beginning. A few months later Shirley was homeless, estranged from family and friends who did not understand her illness.

She found temporary shelter at missions and churches, attempted suicide and — for a while — even lived in the woods in Bartlett. Her access to the mental health system was sporadic and her records in January 1989 showed her prognosis as “very poor.”

But in April 1989 Shirley was referred to the homeless program at the Midtown Mental Health Center, where she quickly responded to group support, medication, a group home and a compassionate case manager, Janice Ballard. Shirley began to manage her illness and to take more control of her life, while never forgetting the lost people she had met and the frightening feeling of homelessness. She began to speak out about the plight of homeless people wherever she could.

She participated in the October 1989 “Housing Now” march on Washington, volunteered at the Vietnam Vet Center and made an emotional appeal before Tennessee’s joint House-Senate Committee on the Homeless. She allowed her story to be told in a video about homelessness in Memphis, spoke publicly about her experiences and served as a panelist at last year’s citywide Symposium on Homelessness. In March 1990 she found her own apartment. Now she is celebrating living in one place for a whole year.

Earlier this year, Shirley’s new-found stability took on added meaning when she was hired as a human resources development coordinator for the Department of Mental Health and Mental Retardation — in a position that makes her an advocate for mental health consumers.

Asked about her own heroic journey from being homeless to being an advocate for those who are homeless, Shirley credits the people who befriended her when she desperately needed it. “I am not ashamed of my illness,” she said. “If I can help one person, that’s all I want.”

Shirley was still living in an apartment of her own in 1994, and getting actively involved in her church.