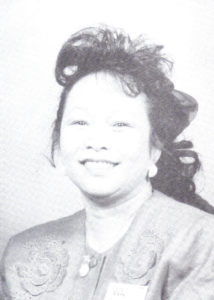 More than five years ago, Dr. Dinia Cruz, a pediatrician educated in her native Philippines and in New York, left the Memphis and Shelby County Health Department and opened her medical practice in Southwest Memphis.

In 1986 she took her practice “on the streets” to address health care needs of people who were going without proper medical attention — often because they had no transportation or did not know they needed care. Dinia knew that her primary area, Memphis’ 38109 zip code, had 66,200 people but only two practicing physicians. She’s one of them and she’s the only pediatrician. Her objective was to go to patients who could not come to her.

At first, Dinia’s 36-foot mobile clinic visited 19 public housing developments six days a week, serving primarily children. Her patients included those who fall between the cracks — people who are not eligible for Medicaid and have no money for doctors. She gives such people free treatment, including medicine and lab work. Her motivation? “I used to see families who never had a shot … I took care of that. So the reward is there,” she said.

But the rising load proved too heavy even for this energetic physician. She now focuses on the five housing projects that are the most isolated from medical care. She takes the mobile clinic out two days a week, with vaccine in the freezer, throat culture gear in the fridge, blood-testing and urine-testing apparatus on the kitchen counter, and a built-in couch doubling as an examination table.

Dinia has received local and national attention for her work in the housing projects. She was recognized by Newsweek magazine in 1986 as “One of America’s 100 Heroes” and again in Newsweek in 1989 in Amway Corporation’s salute to “A Nation of Good Neighbors.” In 1987 Dinia, who immigrated to this country just 10 years earlier, received the Filipino-American Society’s Community Service Award.

“The service has to be rendered,” she humbly says of her heroism. “I find more peace, more fulfillment taking care of the needy ones. If I don’t care for them, who will?”

Faced with turmoil and financial uncertainty due to health care reform, Dinia closed her clinic in 1993. She is working full-time at a Baptist Minor Medical Clinic as a general practitioner and in pediatrics part-time at the Naval Hospital in Millington. She hopes to donate the mobile clinic to a community hospital.