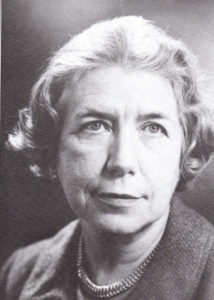 Although the life of Elizabeth Phillips would qualify her as a Woman of Achievement in almost all categories, her outstanding trait was her courage — a quality recognized by her friends and foes alike.

Born in 1906 in Athens, Tennessee, she taught high school in a small town for 20 years while earning her doctorate in English literature. Widowed early, and divorced after an unhappy second marriage, she moved to Memphis in 1953 to join the faculty at Memphis State College (it wasn’t yet a university). Soon thereafter, she signed a petition with a group of like-minded Memphis State professors urging that the Memphis Public Library be opened freely to blacks — instead of only once a week on so-called “black Thursdays.” President Jack Smith demanded a withdrawal of the endorsement from each signatory, under threat of dismissal from the faculty. Though Dr. Phillips, as sole caretaker for her ill and aging mother, dreaded such loss, she adamantly refused to recant, earning the respect of her colleagues and, not incidentally, security in her profession.

Following her mother’s death in the late 1950s, Elizabeth resolved to dedicate her personal energies to, as she put it, “working for the enrichment of all lives that touch mine.” This decision led her to ever-greater involvement in the Civil Rights movement, just getting under way at that time. She worked tirelessly for the NAACP, the ACLU, and was a member of the Tennessee Council on Human Relations.

But her participation became most visible at the time of the 1968 Sanitation Workers’ Strike in Memphis when she was one of the few whites who marched with the strikers. Immediately following Dr. King’s assassination, at a meeting of the group “Save Our City,” called to discuss what needed to be done now, Elizabeth chose as her personal assignment to visit the police station nightly and monitor arrest tactics — this, after numerous reports of police brutality by black citizens arrested during the curfews.

After the strike was settled, and dismayed that her own Presbyterian congregation was not racially integrated, she joined the predominantly black Parkway Gardens Church, one of only nine white members at the time. She then turned her attention to her main interest — education — working with Memphis State’s Black Students Association to bring needed curriculum reforms.

In 1969, Elizabeth chaired a committee that set up a Black Studies course at the college and became the first professor to teach the first course, English 4371, American Negro Literature. Later, on a professional level, she published a series of study guides to the works of such authors as Ralph Ellison, Richard Wright, Lorraine Hansberry and Alex Haley. Haley called her guide to Autobiography of Malcolm X the best he had seen.

Honors came her way in later years. In 1975, she was the first recipient of MSU’s Dr. Martin Luther King, Jr. Human Rights award. That same year the Memphis Newspaper Guild named her Citizen of the Year for her service as “a humanitarian who sought to further ideals of racial quality and human dignity.” In 1980, just a few months before her death, Parkway Gardens Church awarded her the denomination’s highest honor for laity, naming her Ruling Elder Emeritus. By then, she was the church’s only white member.

In her will, Dr. Elizabeth Phillips left her entire estate to establish a scholarship fund to aid MSU’s black students. Thus her heritage lives on.