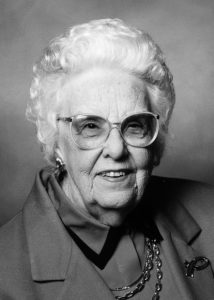 From the day she began teaching first graders in 1929 to today as she teaches prisoners at the Mississippi State Penitentiary at Parchman, Pauline Hord has been on a mission. That mission is to teach reading to as many people as possible as quickly as possible. From the Delta of the southern United States to the mountains and savannahs of Columbia, South America; in classrooms, with individuals and through television broadcasts, Pauline has battled heroically and creatively to end illiteracy.

After years of teaching in the city schools, Pauline learned the Laubach method of reading. Laubach had always emphasized each-one-teach-one, a worthy idea but slow. Given the large population of illiterate adults in the Mid-South, Pauline was interested in maximizing results. In the mid-’50s she took Laubach to the air by working as volunteer director for a literacy program for WKNO. The program was broadcast into homes and community sites such as libraries. There, instructors met with groups of students to speed progress. Sights aimed high, she also worked to establish the World Literacy Foundation.

Aware that illiteracy is a global problem, in the early 1960s, and now in her 50s, Pauline took a leave of absence from the city schools to serve as a Peace Corps volunteer. Though speaking Spanish at only an elementary level, she had a good understanding of the written language. She was assigned to work in Columbia and stationed in Bogota. Using the Memphis model, she designed a Spanish language curriculum to be broadcast all over the country. The Peace Corps assigned over one-fourth of the young volunteers to help. One hundred twenty-five assistants fanned out over the country to tutor small groups, individuals and groups of prisoners.

By the early 1980s, Pauline had discovered the “Sing, Spell, Read and Write” teaching technique. She was convinced that this method could teach reading skills in a matter of months instead of years. She obtained a small grant from Plough to train eight elementary school teachers from one school. The next year the program doubled to 16 and by the eighth year, 454 teachers from 56 schools were trained to use the technique.

Aware that much of the adult prison population is functionally illiterate, Pauline decided to take the reading program for kids to the notorious Parchman Prison, the maximum-security facility in Mississippi, and by the time of her retirement from the school system in 1968, she had already begun. Working with equally dedicated nuns, she recruited as many prisoners as possible for the program. At one point, groups of students were working in five of the prison’s units. More than 30 years later, Pauline, who was 89 in April 1996, continued teaching in the prison, located 120 miles from her home.

In 2002, Pauline published a book of daily devotions titled Praying for the President which she has done daily since Jimmy Carter’s election in 1977.