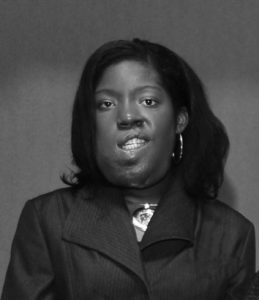 Jaz Gray was born with a rare birth defect called an arteriovenous malformation, an abnormal connection between arteries and veins resulting in too much blood going to the right side of her face. Since the age of 10, she has endured 26 operations. During her sophomore through senior years, she spent every summer as well as Christmas breaks in hospitals or at home recuperating. She had one surgery in which her whole right cheek was removed and replaced with skin from her abdomen and back. Unfortunately this surgery did not eliminate the problem.

Not one to dwell on her troubles, Jaz moved ahead with her life. In 2006, she was a senior at Germantown High School and a Girl Scout. She was looking for a project that would impact lives. She remembered her own long stays in the hospital as a child. Warm, fuzzy pajamas, brand-new, of course, would be just the thing to cheer up a child. A colorful pair of pajamas “gives kids a sense of normalcy,” Jasmine says. “It makes them feel like someone cares about them and is thinking about them.”

Jazmine uses email, posters and flyers and even Facebook, to publicize drives. Since 2006, Jaz’s Jammies has collected and distributed over 2500 pairs of pajamas to children in need in hospitals and shelters. Victims of burns, sexual assault, children living in poverty and in homeless shelters have all been comforted by the gift. One little boy who’d spent all day in a wheelchair in a hospital gown was hugely cheered by his Scooby-Doo flannels.

Now a senior majoring in journalism at Middle Tennessee State University in Murfreesboro, Jaz has taken her efforts to the Nashville area. Not shy, she’s involved family, friends, church members and other students. One Murfreesboro restaurant let her pass out free cups of ice cream to support the drive. Her first donations went to Arkansas Children’s Hospital in Little Rock, where many of her surgeries were performed. Other recipients include Le Bonheur Children’s Medical Center, St. Jude Children’s Research Hospital and Vanderbilt Children’s Hospital.

“She’s a dynamo,” says Steve Saunders, assistant director of the Ronald E. McNair Scholars Program at MTSU. An excellent student, she has a 3.9 GPA and is making plans for graduate school and for obtaining nonprofit status for Jaz’s Jammies.

She is working on a research project on the image of black college students in the media, which she hopes to present in China through the McNair Program. Last year she received a $1,000 Harold Love Outstanding Community Involvement Award from MTSU. She used part of that for a pajama drive. She plans to use the rest on obtaining nonprofit status and possibly establishing a website.

Her father says, ”She’s a very caring, very spirited, loving girl with a strong faith. She has accepted the fact that she is different and that God has a purpose in her life. That’s what has carried her through.” Jaz herself says, “What I love about Jaz’s Jammies is that it serves two purposes: helping children who face incredible odds, whether sick or homeless, and at the same time giving people throughout the community the chance to serve others. It’s a blessing on both ends!”

Jasmine Gray has heroically fought her own health battles. She has used what she’s learned to give children in pain and need just what might help most: Love symbolized by a soft pair of pajamas!