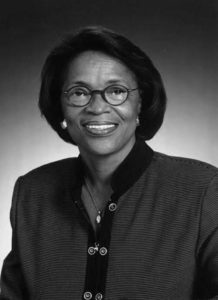 Born in Memphis on May 5, 1945, Lois DeBerry grew up in the Bunker Hill neighborhood of South Memphis and graduated from Hamilton High School. During the 1960’s she took part in the Civil Rights Movement, despite her parents’ objections. She participated in the March on Washington in 1963 and heard Dr. King’s famous “I Have a Dream” speech. She was part of the Student Sit-In Movement against segregation in public places, and marched the 50 miles from Selma to Montgomery, Alabama with Dr. King in 1965, publicizing the lack of voting rights for African-Americans. She said later in an interview with Linda T. Wynn, “Every time I would read the paper, I would get mad about what was going on…I felt that I had to be there to make my contribution….”
She graduated from LeMoyne-Owen College with a B.A. degree in elementary education in 1971 and began to work as a counselor for a federally funded program in Memphis housing projects as a link between families and schools.

She soon realized she was a token African-American as well as one of the few women in a program that wasn’t doing its job to motivate black children to stay in school. She tried calling on a few male politicians with her doubts and, getting no response, she felt frustrated and didn’t know what to do.

She had a chance conversation with an older African-American woman when picking up her car from a repair shop during this time and one thing the woman told her was, “Baby, the only way you can change the system is to get in the system.” This catalyzed her to run for office in 1972, specifically as state representative from the 91st District as a Democrat. She won against four male candidates and headed for Nashville in 1973, one of only five women in the Tennessee General Assembly, the second African-American woman elected, and the first from Memphis.

She gained a reputation as outspoken and assertive, but she made allies, who called her “Lady D.” One of the first bills she sponsored was a law allowing senior citizens the opportunity to attend any state college or university free of charge. Another was gaining the inclusion of African-American history in Tennessee in school textbooks. In 1976 she became chair of the House Special Committee on Corrections and realized it was important to focus on young offenders. She fought for a correctional facility that offered treatment to youth criminals with special problems and in 1978 it came into existence, named in her honor.

In 1981 she married Charles Traughber, chair of the Tennessee state parole board, and had one son from a previous marriage. She continued her legislative career, serving as House majority whip for two legislative sessions in the 1980’s, then decided to run for the position of House of Representatives Speaker Pro Tempore. The Speaker Pro Tempore presides over the House when the Speaker is absent and is a voting member of all House committees, a powerful leadership position. Rep. DeBerry said in her interview with Wynn that she “could not take an all-white, all-male leadership team. I felt I had to challenge the system for the sake of women and for the sake of children. Even if I lost, I felt I had to run.”

In 1986 she was elected Speaker Pro Tempore and became the first woman and the first African-American to hold that position, making her one of the most influential members of the General Assembly. She kept the position for 22 years, until control of the House passed from the Democrats to the Republicans in 2009, after which in 2011 she was honored as Speaker Pro Tempore Emeritus.

While serving in the House, Lois DeBerry was also the first woman to chair the Shelby County Democratic Caucus. She served as president of the National Caucus of Black Women and as president and later a member of the executive committee for the National Caucus of State Legislators. She came to national attention for her 2000 presidential nominating speech for Al Gore, who had been a friend and ally for 30 years. She was a member of Delta Sigma Theta sorority. She encouraged other women to run for office and was a powerful role model for them.

She died after an almost five-year struggle with pancreatic cancer in 2013, having represented the people of the 91st District for four decades, the longest serving representative in the Tennessee state legislature.

Former Memphis Mayor A C Wharton called her “an intelligent, cosmopolitan personality whose passion for the people she served knew no bounds.” Republican Gov. Bill Haslam praised “her wit, charm and dedication to her constituents.”

“She intentionally focused on tough issues, daring others to join her and, by her words, could inspire people to get involved,” said Democratic State Senator Lowe Finney, then of the 27th District. Congressman Steve Cohen called her “a go-to person on everything from civil rights to children’s and women’s issues.” House Speaker Emeritus Jimmy Naifeh said, “Lois is a true Tennessee stateswoman. In the Legislature she led the way on a number of issues important to all Tennesseans including healthcare, education, corrections oversight, and economic development.”

Perhaps her best epitaph is what she said of herself, “I’m not afraid to speak out, and I’m going to stand on my principles, even if I have to stand by myself.”

Women of Achievement celebrates the powerful legacy of Lois DeBerry, our 2018 Heritage honoree.