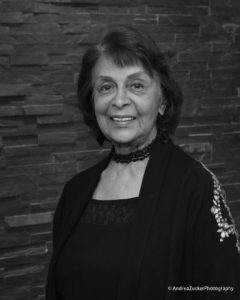 Educator, author and Civil Rights activist, Dr. Miriam DeCosta-Willis has steadfastly worked to advance the cause of Civil Rights and widen knowledge of the Black experience in the United States and the African Diaspora. She understands what it means to break racial and gender barriers and defy the odds. She embodies much of what the Women’s and Civil Rights Movements hoped to accomplish in the last half of the 20th Century.

Miriam organized her first protest while a high school junior in Orangeburg, South Carolina. That same year, she and her mother were invited to lunch by the white wife of a local judge and the wife’s black friend. It was a test to see if she was a “nice Negro girl” who could integrate the prestigious, all-white Westover School for girls, in Connecticut. Though she didn’t know the lunch was a test, she passed and went on to graduate at the top of her Westover class. In 1952, on she went to Wellesley, from which she graduated Phi Beta Kappa.

Marriage brought her to Memphis. After having two children, she decided to pursue a Master’s degree. But, because she is black, this Wellesley Phi Beta Kappa was refused entry into the then-Memphis State University grad school.

Not one to give up, she applied to the Johns Hopkins program in 1959 under her married name – Sugarmon – and was accepted because that school thought she was Jewish. The professor who oversaw the process questioned whether a good Jewish wife and mother would leave her responsibilities at home, but let her in despite his doubts. We can only imagine his surprise upon their first meeting!

At Johns Hopkins she completed a Masters and later became the first African American to earn a PhD there. By then she had four children.

Miriam returned to Memphis to become the first black faculty member at the same university that had previously denied her entrance.

Miriam has been present for significant events in Civil Rights. Visiting her mother, she became an eye-witness to the Montgomery Bus Boycotts. She accompanied her mother to bus stops to pick up black workers and give them rides to their jobs. She was there the day Martin Luther King, Jr.’s home was bombed. Her mother drove them to the site. The crowd was ordered by police to step back. Miriam says, “But my mother stood there with her little short self, and she refused to move. I think that one incident really kindled my own courage and determination not to move back in the face of oppression.”

Miriam was in Memphis when Dr. King was assassinated. She participated in marches in the DC area when teaching at area universities. She and her children marched, were maced, and she has been arrested.

In Memphis, as secretary of the local NAACP, she organized what became known as “Black Mondays,” five days when black students stayed home in protest for quality of education and against lack of African-American representation on the school board. At the University she was advisor to the Black Student Association. Of course, she organized a sit-in at the President’s Office!

All the time she was steadily pursuing her academic and writing careers. A co-founder of the Black Writer’s Workshop, her published titles include: Daughters of the Diaspora; Afra-Hispanic Writers; Notable Black Memphians; Homespun Images: an Anthology of Black Writers and Artists (with Fannie Delk); The Memphis Diary of Ida B. Wells; Singular Like a Bird, the Art of Nancy Morejon and Black Erotica (with Reginald Martin).

Over the years, in addition to Memphis State, she has taught or served in administrative positions at Howard University, LeMoyne-Owen College, George Mason University and the University of Maryland. Now retired, she continues to write.

Miriam attributes her success to her family. Her father was a college professor and her mother a social worker, college professor and public schools counselor. She often heard the story of her grandmother, who registered to vote just two weeks after the passage of the 19th amendment. Her family emphasized education, achievement and accomplishment; tenets she has held firmly.

For this, Women of Achievement gratefully salutes Miriam DeCosta-Willis.