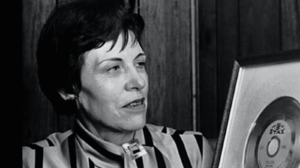 Estelle Axton co-founded Stax Records with her brother, James Stewart. The name Stax itself is a combination of STewart and AXton. Stax became renowned as a leader in soul music, rivaling Detroit and the Motown sound in the 1960’s.

Born in Middleton, TN, Estelle began her career as a schoolteacher in Memphis, married Everett Axton, raised their two children at home for ten years, then worked as a teller in a bank.

When her brother needed money to develop a record company, she persuaded her husband they should remortgage their house and joined her brother as a full partner at the newly named Stax Records in 1959. Together they bought the old Capital Theater in an African-American neighborhood now known as Soulsville, and turned it into a recording studio and a record shop. Her brother ran the recording studio and she ran the Satellite Record Shop, which attracted local talent and provided money in sparse recording times.

“The shop was a workshop for Stax Records,” she explained. “When a record would hit on another label, we would discuss what made it sell.” Musicians recalled Estelle as the one who encouraged them and sometimes made her brother sign them up.

Together with her brother she was involved in finding and promoting the careers of artists such as Rufus and Carla Thomas, Otis Redding, Sam and Dave, Wilson Pickett, Booker T & the MGs, and Isaac Hayes, who said of her:
“Estelle was a very generous woman. She was generous with her time, with her counsel, with her advice. I think she was responsible for the racial harmony at Stax. Mrs. Axton, you didn’t feel any back-off from her, no differentiation that you were black and she was white. . . Being in a town where that attitude was plentiful, she just made you feel secure. She was like a mother to us all.”
The musicians and singers at Stax called her “Lady A.”

“Were it not for her, there’s no way Stax could have become what it became,” said David Porter, a songwriting powerhouse who wrote many Stax hits, such as Sam and Dave’s “Soul Man,” and “Hold On, I’m Coming.” “She had a positive spirit toward the acts in that community and any young kids who came in there with aspirations. There’s no way that Stax could have become Stax without the positive energy that this lady contributed,” he said.

The Stax Museum of American Soul Music opened in 2003, and she lived to see it, dying in 2004 at age 85. In 2007 she herself was posthumously awarded a Grammys Trustee Award, given to “individuals who, during their careers in music, have made significant contributions, other than performance, to the field of recording.”