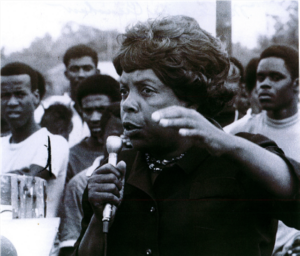 Cornelia Crenshaw was born in Millington on March 25, 1916. At the age of 5, she moved to Memphis where she lived until her death in 1994. She attended Booker T. Washington High School and LeMoyne-Owen College. One of the few African American professional women working outside the field of education, Cornelia was employed for 27 years by the Memphis Housing Authority. She was an advocate for workers’ rights to unionism. It was a stance that got her fired from the MHA. She then sued, unsuccessfully, under the new Civil Rights Bill of 1964.

After she lost that job at the age of 49, Cornelia became a full-time community activist. Noted for her stylish clothing and hats, she regularly attended City Council meetings and usually spoke. Well before Dr. Martin Luther King Jr. came to Memphis to popularize the Memphis Sanitation Workers’ Strike, Cornelia Crenshaw was already working to collect food and other necessities for the strikers’ families. It was she who told the union about Robert Worsham’s poem “I Am A Man,” which then became the heralded slogan of the Strike. She was the only African American woman on the strategy team headed by Rev. James Lawson. She walked in the daily protests downtown and was gassed while participating in the first march led by Dr. King.

Cornelia was well ahead of her time in recognizing institutional racism. In 1969 she protested an increase in garbage collection fees that brought no increased salary to the workers by refusing to pay her Memphis, Light, Gas, & Water bill. After MLGW turned off her utilities, she continued to live in her well-appointed home without gas or electricity for ten more years until she was forced to abandon it. Because of her protest, however, MLGW began to accept partial payments on monthly bills, thus allowing customers to spread out any unusually high monthly bills.

Cornelia Crenshaw’s long-time advocacy was officially recognized when the City Council named the Memphis Public Library Branch at 536 Vance in her honor.