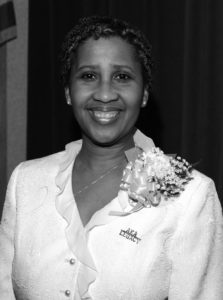 In March 1998, Rev. Rosalyn Nichols attended the third funeral of a
childhood friend, killed by what she calls “relational violence.” She delivered the eulogy, and then asked herself “What can I do to prevent this from happening again?”

Her answer was action — first through Sisters4Life, a small group of women who united after loss of their friend Rosmari Pleasure, shot to death by an ex-boyfriend.

In the years since organizing the first Rosmari Pleasure Memorial 5K Walk/Run, Rosalyn has made domestic violence her singular cause within her service as a pastor.

She organized and leads A More Excellent Way, Inc., a non-profit organization focused on ending domestic violence. Local crime statistics confirm the need – more than 11 percent of homicide cases last year were domestically related. Domestic violence counselors estimate only 1 in 10 cases of assault is ever reported.

“At the heart of it, we have to change the way some people think about how to live in love,” Rosalyn, 41, says. “This ‘break up to make up, that’s all we do’ mentality has to go. We have to change attitudes before we can change behavior.”

She served there for five years before turning her attention full time to A More Excellent Way. Her mission is to promote and encourage loving, healthy relationships in the home, school, workplace, neighborhood and places of worship toward the elimination of violence.

She says, “We want to teach men and women what healthy relationships look like, to make good, stable marriages a functional, acceptable cultural norm.”

The original 5K race has grown into a full weekend called Love4Life dedicated to domestic violence awareness. On the second weekend in November, it includes the 5K run, a conference, a memorial service for families of slain victims and a Sunday “prayer and praise’’ service. Another program of AWay Inc. is called the Circle of Courage which provides training and resources on domestic violence for churches and other faith-based communities. And Love Talks is a study program being developed for high school and college students with a pilot program in place at Booker T. Washington High School.

In 2001, Rosalyn founded at her dining room table with eight other people a ministry that became Freedom’s Chapel Christian Church. In May 2004, she earned her Doctor of Ministry degree from Virginia Union University in Richmond and moved her church into its first worship center. Freedom’s Chapel has grown to about 50 members and has celebrated 15 baptisms of adults and children. “The church and AWay Inc. share the space,” Rosalyn says. “Both are very interested in relationship building and both are faithful to a vision.”

Rosalyn Nichols turned her grief and dismay into action and is determined each day to teach Memphis to love without hitting, without hurting, without violence.

For that work, despite inertia, apathy and ignorance around her, Rosalyn Nichols is the 2005 Woman of Achievement for Determination.