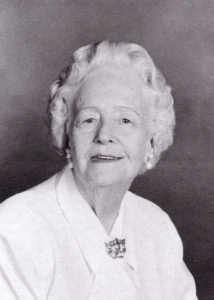 Award-winning performers and ordinary kids alike grew like giant morning glories over the walls of Southern segregation because Lucille Ewing dared to teach life’s lessons through the medium of a theater for all children.

For more than 25 years Lucille was the driving force of Memphis Children’s Theater. She followed in the footsteps of her aunt, Martha Macan Byrnes, who initiated theater for children through the Memphis Park Commission.  It evolved from Recreation Players, a program on WMPS radio in the late 1940s and ‘50s. In the early 1950s, Lucille launched plans for a full-blown theater that would be run by and for children. They would act, build sets and be totally responsible for each play they acted.

At that time, Memphis was even more racially divided than it is today. Yet Lucille made it clear that any interested young person would be welcome in the theater, regardless of race or economic background Productions were cast according to talent and availability — not type.

Despite active attempts to close the theater, funding shortages and strong sentiments in the community that children shouldn’t be so engaged, she persevered for nearly three decades. She broadened the children’s outlook by financing trips to theater productions in the region. On one such outing in Alabama, she and her children held a spontaneous sit-in when a black child with them was refused service in a restaurant.

Lucille’s efforts spanned creation of other children’s theaters throughout the region. Whether regular folks or award-winning performers, the hundreds of Memphis children Lucille Ewing touched grew — the better for her determination to give them a stage on which to stretch their talents.