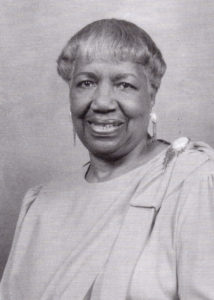 In a 25-year career as a labor organizer, Alzada Clark has braved personal threats and racial epithets in Tennessee, Mississippi, Arkansas and Oklahoma. In 1965 she became the first black woman organizer of state employees in Tennessee and she is responsible for establishment of the local Service Employees International Union.

She was asked in 1967 to organize the women in a furniture plant in Canton, Mississippi. She went into that racially troubled state to help the employees. When the vote failed, she told the men in charge that she would lead the effort next time. Thanks to Alzada’s leadership and courage, at the end of a year of work the vote did pass and the union was organized.

When workers received their first salary increases, two came to Alzada to thank her. One, a black man, said, “Now I can eat a piece of steak more than once a year.” The other man, who was white, said, “Now my kids won’t have to wear tennis shoes in the winter.”

Later, Alzada organized the furniture workers in her native Memphis and in several other Mid-South towns. While president of the local Coalition of Black Trade Unionists, she became the first woman elected to the national position of Second Vice President. That organization also awarded her the Fannie Lou Hamer Award for her efforts on behalf of the people.

Alzada is a vocal civil rights activist and served on the NAACP board. When she sees a problem of injustice she speaks up, despite the possibility of being jailed or losing a job. Often in her career she has required the assistance of bodyguards.

In the words of one nominator, “She has the determination and the courage to seek what is right morally, what is good, and what is noble. She stands as a beacon of light amid the darkness.”