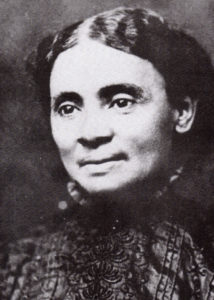 The life of Julia B. Hooks spanned 90 years and encompassed much of the history of the United States. Julia was born free in 1842, the daughter of a former slave. Her mother, Laura, was the daughter of Captain Thomas F. Marshall of Kentucky and his slave. Laura had been given her freedom when she married a man who was free.

Julia also was a musical prodigy, accompanying her mother in vocal concerts on the piano at the age of six.

It was the experience of traveling with her mother to perform that made Julia aware of the importance of color in the thinking of Americans. While her mother and older sister Mary were quite fair, she was copper-skinned like her father. Sometimes on trains heading to engagements Julia and her mother were mistaken for a mistress and little slave. The impression this made on the child never left her as an adult.

After the Civil War Julia’s family moved to Berea, Kentucky so that the children could receive an education at the integrated Berea College. After three years of college, during the last year of which Julia taught music to other students, black and white, she left to go to Mississippi. At that time in the history of the United States, Reconstruction brought new equality, and indeed in Mississippi, dominance by the numerically superior blacks. It offered exciting opportunities for the young teacher, including working in Blanche Bruce’s successful campaign for U.S. Senator. Reconstruction’s changes were short-lived, however, so Julia moved to Memphis in 1876.

Julia’s life in Memphis was centered on children, civil rights, and music. She taught in the public schools, but finding them to be inadequate, started her own private Hooks Cottage School. Jim Crow laws were steadily eroding the gains made by the Civil War, but Julia, educated beyond most women of her time, refused to accept the new restrictions on the rights of blacks. Time after time, she entered a theater only to be ejected because she was sitting in the “white folks” section.

Julia persisted in trying to achieve civil rights for all people. Her grandson, Benjamin Hooks, former president of the NAACP, is an example of the extent of her influence into the present day.

Among other civic activities, Julia and her husband Charles helped raise funds to establish a much-needed Colored Orphans and Old Folks Homes. Julia organized the Liszt Millard Club to provide a musical opportunity for blacks in a segregated world. She operated her own music school. She taught harmony to one student who would become famous, W.C. Handy. She was called “the angel of Beale Street” by Lt. George W. Lee because of her selfless work on behalf of the poor. Along with her husband, Julia administered the first juvenile detention home in the city for black youths. Even when Charles Hooks was shot and killed by one of the inmates, Julia’s work with the juveniles continued.

Julia B. Hooks’ legacy for the future is the determination to make this a more just world for all people, of all ages and races. Her courage inspires us to fight prejudice and to enhance the world around us.