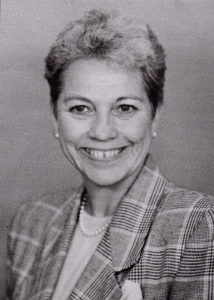 “It is an American characteristic not to confront any problem until it becomes insoluble, and then confront it by turning it over to the schools.”

Joyce North came to that conclusion through the direct personal experience of sending nine children in her combined family to the turbulent public schools of the 1970s.

When she married Dr. William North in 1971, the two had children ranging in age from seven to 19. Busing was just beginning, and in the next few years of changing ages and changing school boundaries, the children were in a total of seven schools. Joyce quickly observed that the quality of public schools varied greatly. Believing that public education is the backbone of a democratic society, and being determined that her children and all children receive the best education possible, she quit her paying job and began the unpaid work of improving the quality of education in our public schools.

By 1980, this former president of White Station PTA was chairperson of the Memphis Better Schools Committee. In 1984, she was appointed chair of the local Commission of Excellence, a group charged with studying city public schools and making recommendations to the Board of Education. The recommendations emphasized that education is a community prowess, a point Joyce North always has taken to heart. Cutting through miles of red tape, she succeeded in getting the funds remaining from the study released to set up a Model School Program at Georgia Avenue Elementary School.

Joyce visited every agency in Memphis that deals with children, and organized an informal committee that met for breakfasts and after work to discuss how to best meet children’s needs. Health was identified as a priority and — fighting opposition — the group worked with the Health Department to establish a clinic at Booker T. Washington High School. She currently works to keep pregnant and parenting teens in school.

Initially concerned that her own children receive an excellent public education, Joyce North’s unyielding determination led her to do everything in her power to see that all children get the same opportunity.

Joyce retired in 1993 with a $650,000 Kellogg grant and three day-care sites in place to support pregnant and parenting teens with the schools’ mental health department. She and her husband are involved in national wildlife volunteering.