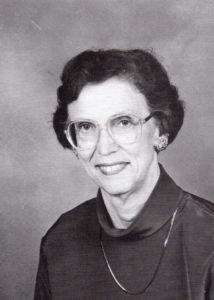 In 1981, Memphis had thousands of hungry people — and no way to feed them. Thanks to the diligence of Virginia Dunaway, the Memphis Food Bank now distributes more than three million pounds of donated, wholesome food to 226 charitable programs and food pantries that feed the needy across the Mid-South.

Virginia Dunaway was active in Balmoral Presbyterian Church in Christian education. She had raised two sons and worked in her husband’s dermatology office when she became a VISTA volunteer on a neighborhood history project. With a year of her five-year VISTA term left, the Metropolitan Interfaith Association sent her to a training session on food banks. When she returned and said it sounded like something MIFA could do, MIFA leaders replied, “Go do it.”

Do it, she did. She designed systems for efficient food distribution, identified sources of food from individuals and industry, and worked with volunteers who solicited donations and community support. For two years, she wore blue jeans to work and kept a suit in the trunk of her car. In the jeans, she drove a truck for food runs, unloaded the truck, sorted food or scrubbed floors. In the suit, she met with business and community leaders to build awareness for fighting hunger.

In 1985, Virginia was named director of MIFA food programs and project director of MIFA MEALS. In 1988, the Food Bank became an independent agency and Virginia became its executive director as it moved to a larger warehouse at 239 Dudley. She meanwhile has helped the Second Harvest National Food Bank Network establish food banks in Jackson, Tennessee; Jonesboro, Arkansas; and Jackson, Mississippi.

The Memphis Food Bank provides food for 284,000 meals and snacks each month to the ill, the needy and to infants. Gid Smith, former MIFA executive director and a co-worker, summed up Virginia’s personal determination this way: “To my knowledge, she has done more to overcome hunger in Memphis than any other private citizen.”

Virginia retired from the Food Bank in September 1991. She received the DAR Medal of Honor in 1993. She travels as a consultant for Second Harvest National Food Bank Network.